How to choose a MicroController using PIC16C84 microcontroller


How to choose a MicroController

It used to be that the number of different microcontroller chips available to the hobbyist was pretty limited. You got to use whatever you could manage to buy from the mail-order chip dealer, and that narrowed down the choice to a small number of chips.

But times have changed. Digikey lists over 16000 different line items under a ‘microcontroller’ search. Which one should a hobbyist with no particular prior experience choose?

Here are some hints. These are particularly aimed at someone trying to pick a microcontroller to use for the first time at least partially as a learning experience, rather than someone who wants to accomplish a particular task.

Update 2009-01-28: This Instructable was recently mentioned in some popular blogs, and is getting a bunch of new readers. Be sure to read the ‘comments’ made by other readers and the responses to them; there’s a lot of value in those comments…

What IS a “Microcontroller” ?

If you ever took a very introductory computer course, you probably learned about the major components of ANY computer:

A microprocessor uses microelectronic fabrication techniques to shrink the CPU to a very small size; usually a single “chip.”

A microcontroller uses the same techniques to shrink the entire computer to a single chip (or very small module.) CPU, Memory, and I/O all in a little package as small as a grain of rice. Just connect up power and it starts doing its thing; computing and talking to the world. Usually the I/O on a microcontroller is aimed at “low level” hardware like talking to individual switches and LEDs instead of keyboards, internets, and displays (like your desktop computer.) A microcontroller is just the thing you want, if you want to talk to individual switches and LEDs…

There are a number design considerations that might immediately reduce your number of choices a great deal.

At this point in time, I would say that a hobbyist should only consider microcontrollers that have internal flash or eeprom program memory and can be erased and reprogrammed a substantial number of times. There are also micros that can be used with external memory (adds complexity and expense), UV erasable micros (usually quite expensive due to the special packaging), one-time programmable chips (potentially usable after you have a working design, but losing their price advantage anyway), and mask-programmed chips (essentially useless.)

If you want your microcontroller to have built in Ethernet, CAN, USB, or even multiple serial ports, many common choices are going to be eliminated. Some peripherals can be handy to have: UARTs, SPI or I2C controllers, PWM controllers, and EEPROM data memory are good examples, even though similar functionality can frequently be implemnented in software or external parts.

It’s convenient if output pins can supply reasonable amounts of current for driving LEDs or transistors directly; some chips have 5mA or less drive capability.

Hobbyists are somewhat limited is the packages they are able to deal with, from a prototyping, PCB fabrication, and/or soldering. That 256 ball BGA coldfire CPU may be sweet, but it’s effectively unusable by mere mortals. Microcontrollers available in 0.1in DIP packages are much easier to deal with. Probably anything with a pin spacing smaller than 0.05in should be viewed with some skepticism.

The size of memory may be an important consideration. Some micros have as few as 256 innstructions and 16 bytes of RAM. You can do a lot in that sort of space (believe it or not), but not everything. Moreover, while you can frequently upgrade to a “bigger chip”, some chip families have relatively small memory limits imposed by their architecture, so even the biggest chip you can get will have only 8k instructions (for example.) RAM (data memory) is usually scarce in microcontrollers; some algorithms require substantial RAM to be implemented in a straightforward manner, and it may be worthwhile looking for a micro with a lot of RAM (or external RAM expansion capabilities) if that’s the sort of thing you had in mind. (For instance, implementing TCP/IP networking protocols in a micro whose total RAM space is less than used by a typical ethernet packet is likely to be … interesting.)

READ  NEW ARTIX-7 FPGA BOARD WITH M.2 INTERFACE FITS IN A LAPTOP 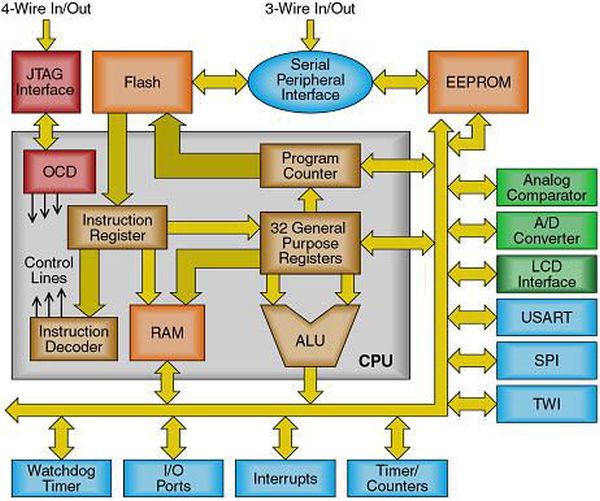 The “architecture” of a microcontroller refers to the philosophy of the internal implementation, sort of. It includes details like how many “registers” there are, and how “general purpose” those registers are, whether code can execute out of data memory, whether the peripherals are treated like memory, registers, or yet something else, whether there is a stack and how it works, and so on.

You will hear people talk about how some architectures are better than others. I suppose this is true. But I’m going to claim that it is largely irrelevant for the typical hobbyist. If you wish to avoid the architectural quirks of a particular family of microcontrollers, you can use a high level language. If you’re willing to program in assembler, you’re at a level of interest where learning and overcoming the quirks is party of the stuff you should be learning. Besides, we’re not talking here about evaluating some new architecture that some company is proposing. All of the chips I mention in this instructable have been around long enough that they’ve proven that their architectures are good enough for MANY real applications.

Here are some architectural “features” you may read about and some explanation of what they mean.

In the old days, CPU designers were getting clever and wanted their CPUs to support high-level language features in hardware, leading to cobol-like string manipulation instructions that accepted arguments in blocks of 8 registers. IIRC, it was Berkeley and IBM who noticed that compiler writers didn’t really know how to USE such complicated instructions from a compiler, the amount of silicon real estate used by these instructions was getting large, and in fact the hardware implementation sometimes wasn’t as fast as doing the same thing in software anyway. So they said “I bet we can make the CPU go a lot faster if we leave out these complex instructions and dedicate the silicon to more registers or cache memory or something”, and thereby invented the RISC CPU. Nowadays “RISC” is widely used by marketing departments to mean “we don’t have very many instructions”, even if the rest of the architecture isn’t very much like the original RISC researchers had envisioned.

In an “accumulator based” architecture, there is usually one “special” register where most of the actual computation (math, logic, etc) occurs. Some effort has to be spent to get operands into the accumulator and results back out to where you need them. The opposite is a processor with “general purpose” registers, where any of several registers can be used for math/etc.

A load/store architecture typically means that operands to ALU operations have to be in registers, so that you have to load them from memory beforehand and store them back when operations are complete. The opposite typically allows operations between a register or
accumulator and a memory location directly. RISC architectures tend to be load/store, since a lot or the CISCness of CISC processors shows up in implementing complex “addressing modes” for accessing the memory operands. In a RISC architecture, all that complexity only has to be implemented in the load and store instructions (if at all.) 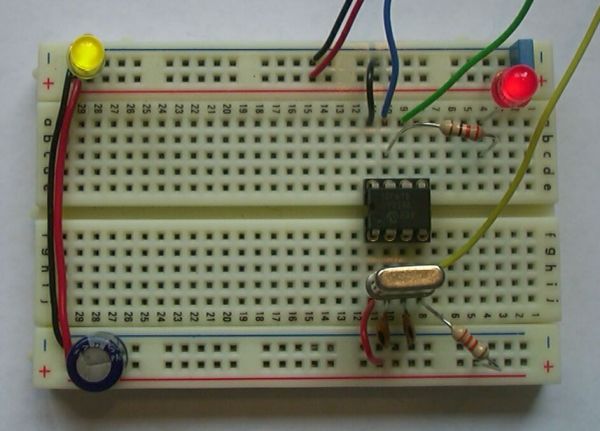 Minimally, you’ll need some sort of programmer to load the program into the microcontroller.
These vary wildly in cost. It’s pretty common for manufacturers to offer some low-cost programmer so that people can “evaluate” their microcontrollers without risking too much cash (or requiring director level approval 🙂 “low cost” used to mean “less than $500” (which happens to be a common “expensable” limit), but the number has been going down. I think you can find manufacturer supplied development tools for most of the microcontrollers mentioned here for
$50 or less.

Cheaper tools can be bought from third parties, or built yourself. If you don’t mind the possibility that bugs in your tools might cause more problems than bugs in your code.

Maximally, production gang programmers, In circuit emulators, logic analyzers, oscilloscopes, lab-bench power supplies… You can spend as much money as you’ve got, probably.

All of the microcontrollers mentioned here have some level of standard tools (at least an assembler) provided by the manufacturer. Most have “Integrated Development Environments” (IDE) that allow integrated use of an editor (that you won’t like) with the assembler, some compilers, and a simulator (of perhaps limited value.) Some have significant additional support from the open source movement.

Tools from manufacturers aren’t always great, but you appreciate them more after you’ve tried to use a microcontroller that doesn’t have any such tools available…

If your budget extends as far as $100 for the computing hardware, it’s worth noting that you
have bought your way into an interesting realm of “bang for buck.”

– Relatively fancy development board for most micros; covering a wide range of processors and performances (including PC compatibles, for instance.)
– brand new Low end palmtop (ie Palm Z22)
– used last-generation desktop system (go two generations old and you can probably get a display too.)

It WON’T buy much in the way of custom development, if you’re paying for it.

Now a palmtop makes a lousy motor controller. But if you “need” the color display and touchscreen, it might be easier (and cheaper) to add motor control electronics to a palmtop than it is to add a display to a bare microcontroller. Especially since the palmtop comes with a development environment for making the display DO things…

Flash memory based PIC microcontrollers curently range from vanishingly small 6-pin chips in SOT23 packages to 100pin TQFPs. The basic architecture has been extended to chips with 16bit ALUs and integral DSP functionality.

Microchip has a liberal sample policy and chips are widely available from many vendors.

As near as I can tell, Atmel came along and decided to steal some of Microchip’s business by offering “similar but better” chips. Some things they did right, some things they didn’t do so well. But the Atmel AVR chips have also gained a lot of popularity among hobbyists, and we get to cash in on the sometimes-war between Atmel and Microchip. My subjective observation is that microchip seems to do low-end chips a bit better, and Atmel does high-end chips a bit better.

GCC supports all but the smallest AVRs; giving you a C compiler of substantial quality for free.

For more detail: How to choose a MicroController using PIC16C84 microcontroller

MikroElektronika’s “Ready for PIC” board talks to “Processing” using PIC16F887

“Ready for PIC“ is one of MikroElektronika‘s compact prototyping boards for 28 and 40 pin PIC microcontrollers. The board comes...