Many Yaesu transceivers from the 1990s and thereabouts could use an optional FTS-8 module, that provided subtone generation for transmission, and subtone decoding for CTCSS reception. One of the radios that used this module was the FT-736 multiband, multimode full-duplex VHF-UHF rig. I bought one of these radios in 1992, to use it on the many amateur satellites that were operating back then. I included optional band modules in the purchase, but not the FTS-8, because it seemed a bit odd to me to have subtone capability in a satellite radio! After all, satellites don’t use subtones, right?

Well, the years passed, and eventually FM repeater satellites were placed in orbit that did use subtones! I needed an FTS-8. But since these sats were few, and my activity was mostly on the digital sats, which fortunately had no use for subtones, I made do without. 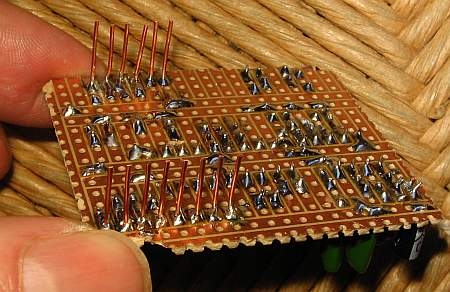 Until recently. The digital satellites are all dead, almost all new satellites are just completely useless little beeping cubes, and if one hopes to have any satellite activity at all, one needs subtones to access the very few FM voice sats that sometimes might operate. So, I was in the market for an FTS-8.

Yaesu stopped making this module long ago. Used modules do pop up on the market, but fetch collector’s prices. I won’t pay 120 dollars for a tiny board with two chips and a couple small components on it! There is also a company that makes a full replacement for the FTS-8, but at 80 dollars it’s still too much, even if at least I would get a new, guaranteed good module. So, in the best ham spirit, I set out to roll my own, and make the design available to all of you.

Is anyone out there who actually uses CTCSS? I mean, who uses it to silence the receiver and only let the squelch open on signals that come with a specific subtone? I think that few people do this, if any at all. CTCSS is more typically used on repeaters, and the normal user stations just need to transmit a subtone, but don’t need capability for receiving any. At least, that is my case, and so I decided to make a module that would only generate subtones, but not decode them. This makes the design much simpler.

I used a PIC microcontroller to read the commands coming from the radio’s CPU, interpret them, and generate the proper subtones as a pulse width modulated digital signal. This is followed by a four pole active low pass filter with a Chebyshev response, calculated for a cutoff frequency of 280Hz, which is just above the highest subtone. The output is a clean sine wave, which is fed to a small potentiometer that allows setting the proper level. And that’s all! 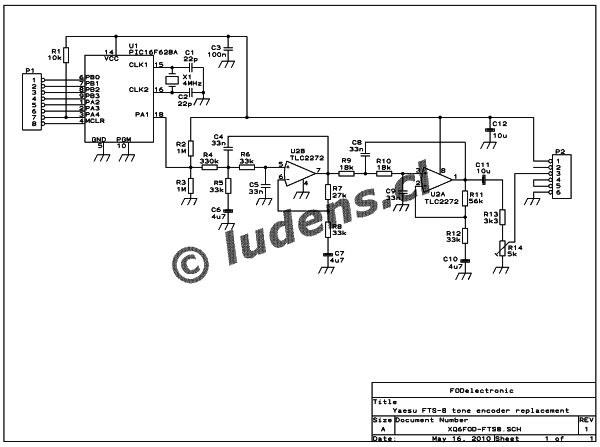 R2 and R3 are there only to keep the op amp circuit biased during RX, when the PIC is in high impedance. While the PIC is running, they don’t do anything.

As you can see, the circuit around the PIC is pretty simple! That’s one of the many nice things about PICs. Use them once, love them forever! The active filter has many more parts, but at least all are commonly available and inexpensive. I still love active filters too, but that’s me! I don’t know about you.

P1 and P2 are header type connectors. Since the females are in the radio, and this module needs the male connectors, I simply soldered pieces of copper wire to my board, in the exact positions to fit the connectors in the radio. It works well, and it would be hard to get anything cheaper than that.

One very common thing in electronics is the need for two intelligent devices to communicate with each other. When you...