Since the development of the wide-band VCO almost 10 years ago, the whole spectrum-analyzer project with all related accessories: tracking generator, harmonic converter, storage-normalizer, marker counter and accessories developed by other experimenters (Darko S57UUD) have been published in many different places: magazines “VHF-Communications”, “AMSAT-DL Journal”, “CQ ZRS” and the book “Beacon 99” (project Phare, http://www.s53m.com/). It is reasonably believed that the the project has been successfully reproduced in hundreds of units. Since the spectrum-analyzer project is still very interesting for many radio amateurs and other radio and electronic experimenters, I decided to republish my original articles in English on my personal web page. Unlike printed magazines, the web allows to publish many color pictures of all interesting details of the project in addition to PDF, PCB and software files. Last but not least, updates to the project are really simple on the web.

In this article a simple and inexpensive LCD oscilloscope to be used as a display for the spectrum analyzer will be presented. Although a small LCD screen is unable replace a good analog oscilloscope, a LCD may be very useful in field measurements under strong daylight conditions, for battery operation or simply when the available oscilloscope is required for a different measurement at the same time.

Before describing the LCD oscilloscope, some necessary updates to the spectrum-analyzer project will be presented. As expected and also according to the feedback, the most difficult part to reproduce is the wide-band VCO. This difficulty is in part due to component tolerances and in part due to assembly (soldering) tolerances. In particular, the BB833 varactor diodes were found to have rather wide manufacturing tolerances both in the capacitance range and in the series (loss) resistance affecting the Q of the varactor.

As already explained in the VCO article, two different printed-circuit boards are proposed for the wide-band VCO. Starting with unknown components, one should always assemble the “narrow-stripe” wide-band VCO first (PCB#1). The “wide-stripe” PCB#2 should only be used if the frequency coverage obtained with PCB#1 is insufficient.

If output power of the wide-band VCO drops in the middle of its frequency range between 2.5GHz and 3GHz or the VCO simply stops oscillating at all in this frequency range, excessive losses in the BB833 varactors are suspected. Besides poor varactor Q (try getting better BB833 varactors from a different source), the interdigital feedback filter may be misaligned due to soldering tolerances. In the latter case, a rather simple solution is to try to trim the length of the open end of the central finger of the interdigital filter.

Although the wide-band VCO design was also published in a well-respected and widely-known professional magazine “Microwave Journal” already back in 1999 [1], it took several years for the professionals to fully understand the operation and capabilities of this VCO design. Multiple-resonator-multiple-varactor microwave VCO modules only became available recently on the professional market. Finally, there is a valid and inexpensive alternative to the YIG oscillator! Of course, these inexpensive commercial VCO modules can be used in place of the described wide-band VCO.

After using the described spectrum analyzer and all related accessories for many years, some long-term effects were noted as well. The worst seems to be the corrosion caused by outgassing chemicals from the antistatic foam used as a microwave absorber in high-frequency shielded modules. A higher conductivity foam makes a better microwave absorber, but unfortunately more chemicals cause more corrosion as well! Fortunately, the microstrip circuits of the spectrum analyzer continue to work correctly with little if any degradation, although they really look ugly…

A less-frequent problem is a long-term failure of ATF35176 or similar HEMT devices. If the voltage between drain and source is kept too high, the drain current slowly decays. This decay may be very slow, just a few percent per week, but it is cumulative, irreversible and continues down to zero leading to a total failure of the circuit!

Some electronic parts became obsolete or hard to get. The most difficult seems to be the INA10386 MMIC amplifier that has no direct replacement. Worst of all, defective factory rejects are shipped for some obsolete parts, like the uA723 voltage regulator. Some uA723 regulators have a very noisy voltage reference with very large 1/f “popcorn” noise. The latter may be large enough to disturb even large-signal circuits like the video amplifier inside the spectrum analyzer.

Besides getting better uA723 regulators, there is a simple solution to this problem. The internal 7V voltage reference, available on pin 6, should be filtered before use. If the latter is fed through a resistor to pin 5 (non-inverting input), then a single electrolytic capacitor from pin 5 to ground (pin 7) solves the problem.

LCD modules are probably the most popular displays today, ranging from simple numerical displays with few single-color digits to large, graphical, high-resolution, full-color computer monitors. A medium-resolution, single-color graphical LCD module is required in an oscilloscope display for a spectrum analyzer. Of course, a simple solution was sought for the described spectrum-analyzer project.

Medium-resolution graphical LCD modules may have different interfaces. The simplest LCD modules have no built-in controller. These modules only have shift registers associated with the columns and rows of the display. The user has to provide a continuous data flow to refresh and multiplex the display content. This requires a powerful microprocessor with lots of memory or in other words a complicated circuit with many chips.

LCD modules with a built-in controller providing the refresh and multiplex of the display are much simpler to use. The most popular alphanumeric controller is certainly the Hitachi HD44780, that even has some very limited graphical capabilities. Older graphical LCD modules use the Toshiba T6963 controller with an external 8kbyte RAM (usually 6264). These modules also require a negative-voltage supply for the LCD and a high-voltage AC source for the electro-luminescent backlight.

Recent graphical LCD modules use the Samsung KS0107 and KS0108 chips. The KS0107 is the clock generator, scans 64 rows and may drive multiple KS0108 chips. The KS0108 drives the columns and includes storage for up to 64×64 dots. The microprocessor simply writes into the RAM inside the KS0108 chips. These modules usually include one or two 7660 chips to generate the required negative Vee LCD supply of -5V or -10V on-board the LCD module. Finally LEDs are used for the backlight so that the module can be operated from a single +5V supply.

A 128×64 graphical LCD module is used in the described LCD oscilloscope. This module includes one KS0107 and two KS0108 chips. All three controller chips are usually bonded directly to the printed-circuit board and covered with drops of black resin. 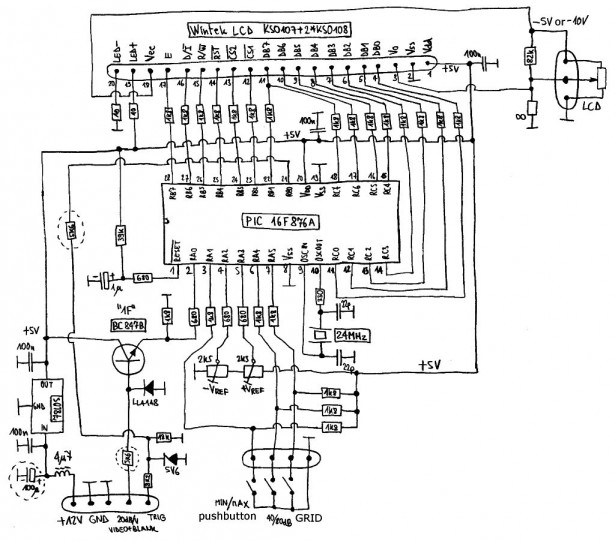 The LCD oscilloscope requires two signals from the spectrum analyzer: the analog video (including blanking) and the trigger. Due to the limited resolution of the LCD, the analog signal is oversampled. Each column on the LCD is computed from eight consecutive samples and the last sample from the previous column. The A/D sampling rate is set so that the whole sweep (128 columns or 1024 samples) corresponds to about 20ms or in other words the fastest rate of the described spectrum analyzer.