How to Implement SPI Using PIC18F4550


The Serial Peripheral Interface (SPI) is a high speed, synchronous, serial communication standard. This communication protocol is basically a Master – Slave implementation where the master device controls the clock based on which the slave devices operate. The master communicates with a slave or a number of slaves in a system through the SPI bus.

The SPI is a full-duplex high speed communication protocol. The master and slave can transmit and receive data at the same time. The master is the device which generates clock for all these data transmissions.

With the help of an LCD, this particular project demonstrates the complete data transfer between a master and slave when both the master and slave are transmitting and receiving the data at the same time.

In PIC18F4550 microcontroller the hardware implementation for the SPI interface can be viewed as a simple SISO (Serial-In-Serial-Out) Shift register controlled by a Clock. 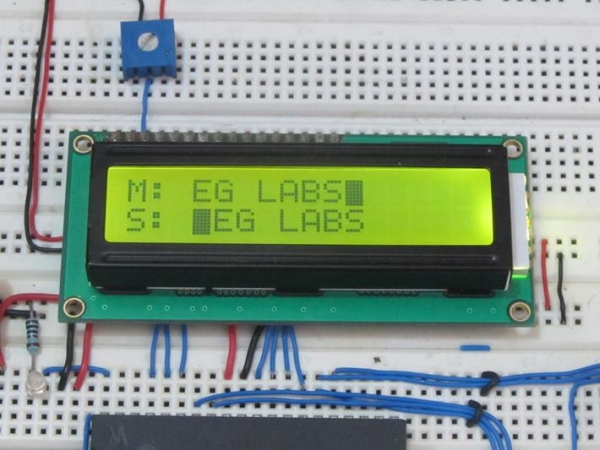 The Clock unit can generate the clock required for the data transmission. In case of a master device the clock is generated by the device and all other devices in the SPI bus send or receive data to the master based on this clock. When the microcontroller is configured as a slave it can only accept the clock from a master device.

On each clock generated or received one bit in the SISO register is shifted from the SDI to SDO. After the eighth clock since the communication starts, one byte of data has been shifted out through the SDO and one byte of data has been shifted in through the SDI. Now the SISO has an entire byte received from the slave while transmitting a byte to the slave.

The Synchronous Serial Port Status (SSPSTAT) register is the register which holds the status of the SPI module. The first two bits and the last bit of this register are only dedicated for the SPI communication.

The SMP bit decides when the master should sample the data, the CKE decides when to transmit data based on the clock transition and the value of BF indicates whether the SSPBUF is full or not (reception complete or not).

The Synchronous Serial Port Control 1(SSPCON1) register is the register which is dedicated register for the control of SPI only. All the bits of these register are significant and should be carefully set them.

WCOL bit indicates whether a Write collision has been occurred or not, the SSPOV indicates whether an overflow occurred in SSPBUF or not, SSPEN is the bit which is used to enable or disable the SPI module. The CKP bit is used to decide which are the idle state and the active state of the clock. The bits SSPM3 to SSPM0 is used to set the device as a master or slave with required clock frequency for master and SS enabled or disabled for the slave.

The registers are explained with more details in PIC microcontroller

Apart from simply writing into the SSPBUF for data transmission, the master or slave can also read the received data from the SSPBUF. The master and slave should write or read from the SSPBUF in a particular manner only. Read PIC microcontroller tutorial to know more.

The SPI protocol is implemented in different devices in different manner and hence when it comes to the coding one should carefully study all the hardware details regarding the SPI implementation in the device for which the coding should be done. Care should be taken especially on the clock frequency, SPI pin’s multiplexed arrangement, clock polarity settings, use of SS pin and code performance etc. To have clear understanding of code writing visit PIC Microcontroller tutorial.

READ  Details of PIC ICSP and how to use it for pic microcontrollers.

The code includes a few functions for initializing the SPI module, sending and receiving the SPI data etc. The details of the functions are given below;

This function is used to initialize the SPI module as a master with the required clock frequency. It also set the clock polarity and when to sample input data and to transmit output data regarding the clock transition states. It also sets the SPI pins as input or output as required by the master. It can also disable all other modules multiplexed into the SPI pins.

This function is used to initialize the SPI module as a slave with SS pin enabled. It also set the clock polarity and when to sample input data and to transmit output data regarding the clock transition states. It also sets the SPI pins as input or output as required by the slave. It can also disable all other modules multiplexed into the SPI pins.

The functions are explained with more details in PIC microcontroller tutorial.

MASTER AND SLAVE AS TRANSMITTER AND RECEIVER

The arrangement below shows how the master transmits some meaningful data to the slave which the slave can receive. The data which the master transmits is displayed in the first line of the 16×2 LCD. The slave then transmits the same data which it has received back to the master which is then displayed in the second line of LCD. In this way the master is doing transmission and reception and the slave is also performing transmission and reception. Since the PIC18F4550 is used as master and slave the capabilities of the SPI module of the PIC18F4550 is exploited to the maximum in this project. The following figure can make the arrangement details more clear; 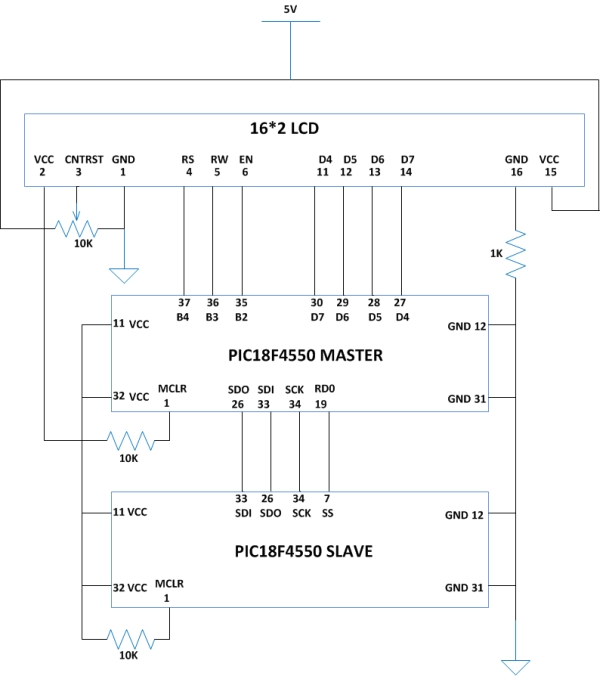 Recently I got my hands on a couple of HSDL-1100 based IR transceivers and a KS070B LCD display module. This...