The PIC18F4550 has a built-in 10bit ADC, which is provided with a13 input channels. It has a PWM module with four output channels. In this particular project the ADC, PWM modules are used along with the timer0 modules and the method of using those modules are already discussed in previous projects. This project is actually an application which makes use of the above mentioned modules. Both the coding and the external circuitry have equal importance in this project. 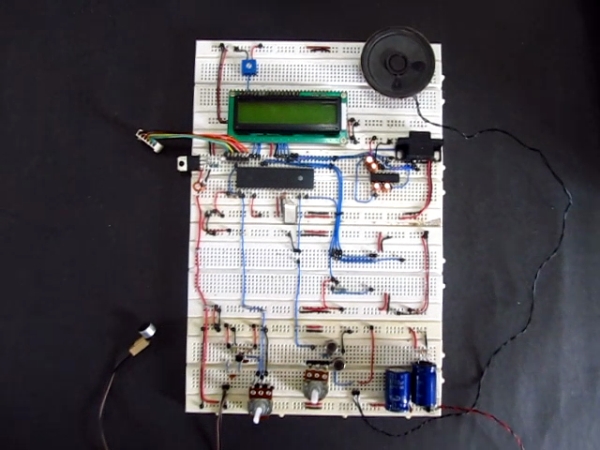 The voice input block has a microphone which captures the voice signals from the surroundings. The voice signals are then amplified to a certain level using a small amplifier circuit. The amplified signal may have both positive and negative cycles. Since the ADC of the microcontroller can read only the positive voltages, the signal output from the amplifier should be clamped above the zero voltage level so that the ADC can read the complete cycle.

Hence the VOICE INPUT block is designed to capture the voice signals and modify them in such a way that the ADC of the microcontroller can read them. The following figure shows the different sub blocks inside the AUDIO INPUT block which helps to capture and modify the audio signals.

The following image is the signal captured using CRO at the output of MICROPHONE CIRCUIT. The Volts/Division of the CRO has been set to 0.05V

The voltage signal coming from the MICROPHONE CIRCUIT is very small and hence these cannot be read by the microcontroller. Before fed this signal to the microcontroller it should be amplified. In this project a NPN transistor is used to amplify the voice signals to a particular level so that the ADC will be able to read it. Another advantage of using the amplifier is that it somewhat reduces the noise which forms along with the voice signal at the MICROPHONE CIRCUIT.

The following image is the signal captured using CRO at the output of POSITIVE CLAMPER. The Volts/Division of the CRO has been set to 1V

The amplified signal could be sometimes larger than which the ADC can convert completely. For all the signal voltages above the ADC reference voltage the ADC will produce its maximum value only. The values which are read by the ADC are directly used to modify the pulse width of the PWM wave.  Since the maximum pulse width in a PWM cycle is also limited the voltage level that is produced by the AMPLIFIER should be kept in a suitable range. The voltage divider block which consists of a variable resistor connected across the POSITIVE CLAMPER will help to keep the voltage level in a range which the ADC can read and also the pulse width of a PWM wave can represent.

The timer module is used to generate period interrupts at a very high frequency which is well above the frequency of the audio signals. Each time the interrupt fires the value captured by the ADC is read   which can be called as the sampled value of the signal at that particular instant. Thus the timer act as the sampling period generating block which samples the audio signal captured by the microphone. 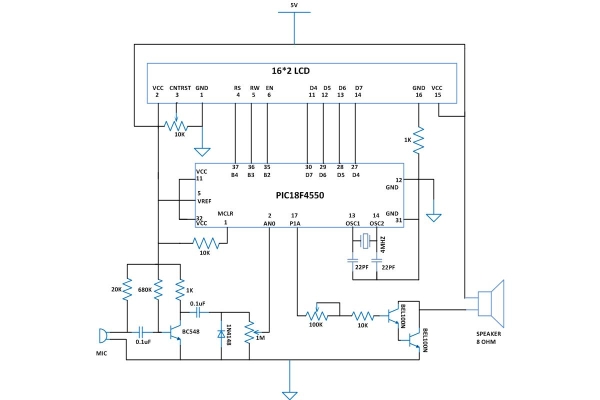 Using the timer0 module to generate sampling time is explained in a previous project on Sine wave generation using PWM module of the PIC.

For more detail: How To Use PIC Microcontroller For Voice Input And Output