The design is deliberately simple with each LED being directly driven from a PIC I/O pin.  This and the inclusion of an in-circuit programming header (ICSP) make the circuit ideal for teaching/learning introductory PIC assembly language programming.

The circuit has been constructed on a PCB but can easily be built on strip-board or a solderless breadboard. 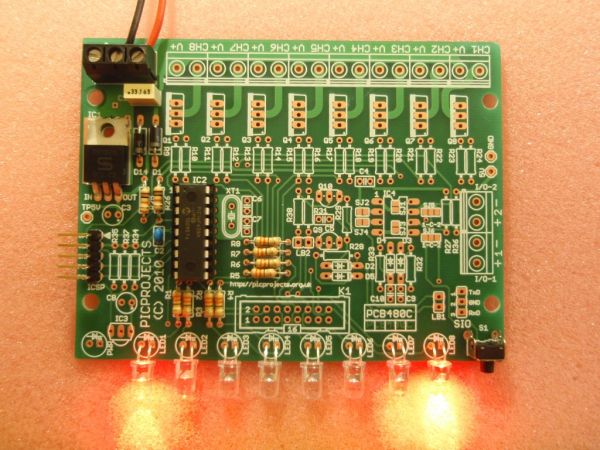 The heart of the LED chaser is the PIC 16F628A microcontroller, IC2. The program that runs on this chip controls the LEDs attached to the output port pins.  Resistors R1 thru R8 limit the current through LED1 – LED8 to a safe level that won’t damage the PICs I/O ports or LEDs.  Resistor R9 provides a pull-up for the input connected to switch S1.  R10 pulls up the PIC’s MCLR reset signal during normal operation while allowing the input to be raised to 12.5 volts during in-circuit programming.  JP1 provides connection for an ICSP programmer such as a PICkit2 making it easy to reprogram the PIC without removing it from the PCB.

Power is supplied to the circuit via J1 and must be smooth DC between 9 and 14 volts.  The PIC requires a precisely controlled 5 volt supply and this is provided by IC1, a 7805 3-terminal, 5 volt regulator.  Typical current drawn by the circuit with all LEDs on is only around 100mA so the voltage regulator doesn’t require any additional heatsink. Capacitors C2 and C3 stabilize the regulator.  Diode D1 protects the circuit from accidental reverse polarity of the input voltage.