How to interface RFID with PIC18F4550 Microcontroller


RFID (Radio Frequency Identification and Detection) is widely used everywhere from highly secured defense laboratories to school attendance system. By employing RFID, much secured entry systems can be developed without incurring huge costs. These are the reasons of excessive use of RFID technology. In this article, interfacing of an RFID reader module has been explained with PIC18F4550. The USART interrupt, an internal PIC interrupt, has also been explained. (For more details on USART, refer PIC EUSART)
As explained earlier (refer RFID interfacing with 8051 & with AVR), an RFID module consists of an RFID Reader, a line converter (usually MAX232) and a COM port. The line converter of this module converts the TTL logic voltage of RFID Reader to RS232 logic. Therefore, to convert the voltage level from such an RFID module, another MAX232 is used to interface it with a microcontroller. 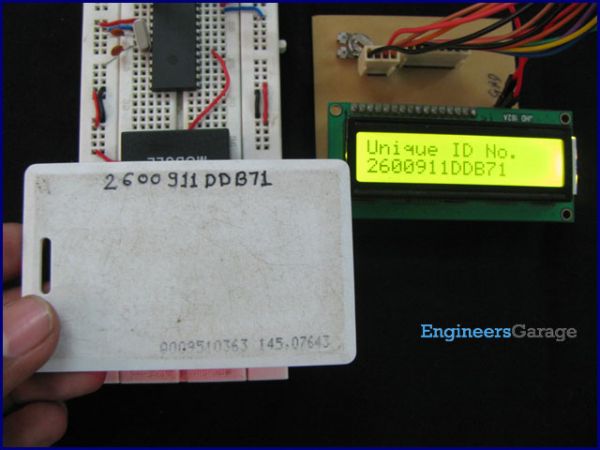 One can also use an RFID Reader directly to interface with the controller, thus avoiding the need of voltage level converters. Here both the MAX232s have been eliminated from the circuit and RFID reader is directly connected with the PIC microcontroller.

The following table explains the pin diagram of the RFID Reader module.
Another part of the RFID system is RFID tag, which contains 12 bytes of unique data. As the tag comes in the range of the Reader Module, it gets activated and transmits this unique code. (For more detail on working of RFID system, refer the article on RFID) The objective here is to receive this 12 byte unique code and display on a 16×2 LCD using PIC18F4550.
With the RFID interfacing, this article also explains the USART interrupt which is an internal interrupt. (For external interrupts, refer PIC Hardware interrupts) The internal interrupts, unlike hardware interrupts, are associated with internal peripherals of the controller. To use the USART interrupt, following registers have to be configured accordingly.
For more detail: How to interface RFID with PIC18F4550 Microcontroller
Share this:
READ  Display BMP images from SD card on ST7735 TFT screen

Are you a beginner in micro controller projects?and are you stuck where to start from?if yes,then this is one of...