Digital electronics and Analog electronics doesn’t mix easily. A Microcontroller can’t get analog values unless an Analog-to-Digital converter is used, however, you may find a little complicated the use of an ADC and it need lots of Input/Output ports.

Some Microcontrollers, like the small 8-pin Microchip PIC 12F675, do have an ADC integrated, but it is expensier than a PIC without ADC. A simple solution is to use a RC circuit to measure the resistance or capacitance.

Basically, a RC circuit is just a capacitor and a resistor. The circuit labeled A shows the most common RC circuit used. I like to use the B circuit, I get better results. 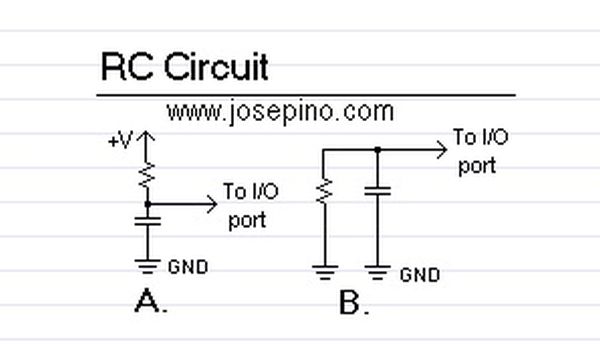 Just connect the RC circuit directly to an I/O pin of the microcontroller. You can use a 33pf capacitor and 1k resistor.

The PIC will measure the RC value of the I/O pin. If the time measured is too long, that means; there is no key pressed. Precision resistors and Mylar capacitor is required to get exact values.

You can see my ” Security Keypad ” uses a similar technique.

Description PIC RGB is a circuit that generates random RGB colors using a RGB LED and fades between them. The...