Schematic design with the PIC16F84A microcontroller


Many circuits on the Internet are built with a CD4017 counter IC. I myself chose to use a microcontroller for this job: the PIC16F84A. A microcontroller increases the complexity but it allows you to build a very flexible light computer. The circuit can be kept very small, this was a requirement for this circuit. 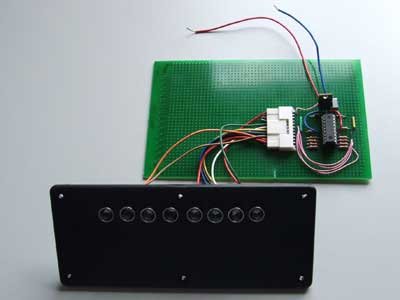 The circuit can be powered by a DC voltage between 7 … 12 V. I used a 7805 regulator to create a stable 5 VDC voltage. It you want to keep the circuit very small you could use a zenerdiode for the stabilization.

The microcontroller is oscillated by an external RC oscillator. The capacitor was left away. This can be done but it decreases the stability of the frequency. The resistor has a value of 10k.

The microcontroller drives LEDs through output ports RB0 … RB7.. During the execution of a knightrider effect there are always 2 LEDs active at a time.

I did some measurements on the circuit and the LEDs are active for a period of 0.14 seconds. To change the speed you can simply change the value of resistor R1. You could also add a capacitor between OSC1 and the GND. 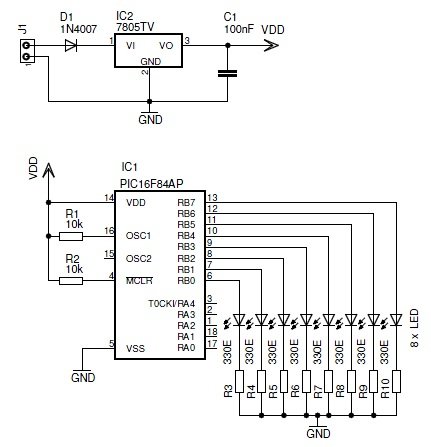 Over time I wrote two different versions of the software for this light computer.

For more detail: Schematic design with the PIC16F84A microcontroller

After doing two weeks on LCDs, I thought I'd spend a few weeks focusing on the number one question that...