A very popular type of LED that has finally come about is the tri-color, RGB LED. The RGB stands for: red, green and blue since the LED is capable of displaying all three colors, independently. This means that an RGB LED can display any color of the rainbow. This is a powerful capability, but it also requires more control.
In this article, we shall look at how to build an RGB LED controller so that we have accurate and independant control over all three colors at any instant. The method of Fading LEDs via PWM will be leveraged for this design, since our goal here is quite similar, but with more control paths. 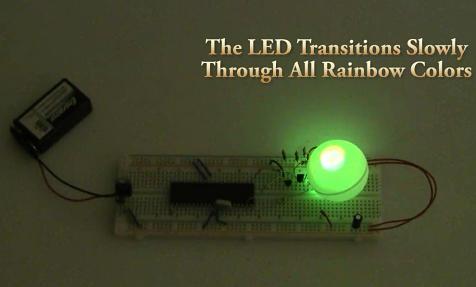 Purpose & Overview of this project
The purpose of this project is to build an RGB LED controller that can display all the colors of the rainbow is a slow, but methodical motion. A microcontroller should be used with 3 digital outputs. An interrupt timer routine will be used to keep track of elapsed time, along with counters to know what duty cycle the PWM control should be outputting.
The PIC 18F452 will be used as the microcontroller of this project with a 40 MHz crystal clock. Running this fast will allow the microcontroller a greater resolution of control for the PWM’s duty cycle. A common-cathode high intensity RGB LED will be used with 3 2N2222 general purpose transistors to control switching when the R/G/B portions of the LED should be connected to power or ground.

PIC 18F452
This microcontroller built by microchip will serve as the intelligent device for our system, controlling the RGB LED at our will. It will run at a 40 MHz crystal clock speed, which is the maximum for the PIC18F452.

7805 +5 Voltage Regulator
This +5v regulator will be used create the power supply source for all of the electronics used in this circuit. Since the circuit is very small the actual load placed on this regulator will be small, maybe 100 miliamp.

PICkit 2
The PICkit 2 is a programmer for the Microchip PIC microcontroller and it has a legacy for being one of the best, even with the 3rd version already available. You will need some programmer to get your programs onto the PIC and this is the one that I suggest.

RGB LED
This is the common-cathode RGB LED. It has 4 wires coming out of it. The longest wire is the ground pin. The other 3 wires connect to the anode of the Red, Green and Blue LEDs. You can test each portion of the LED by connected a 100Ω resistor a power source (9v battery) and the ground pin to ground.

Jumper Wires & Breadboard
I prefer to use a breadboard with the projects in my articles because they offer maximum flexibilty with circuit design with minimal downtown between changes. In addition to the breadboard you will need jumper wire to get everything connected together.

Schematic Overview
The schematic for this tutorial was kept as simple as possible so that the focus could remain on how the touch screen works and how we interface to it. You can see the completed schematic for this project below. The main parts in the schematic are the RGB LED, 18F452 and LM7805. 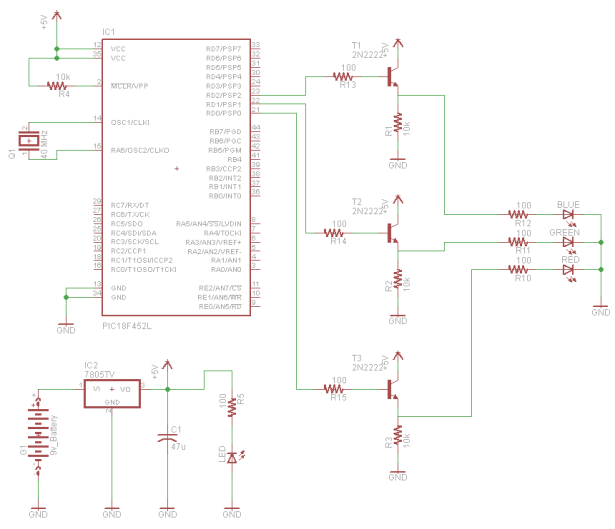 Power Regulator
The power regulation circuit is a LM7805 +5v regulator that will convert the +9v from the battery to a steady +5v output to the PIC.

PIC Microcontroller Circuit
The microcontroller circuit consists of the PIC 18F452, it’s 40 MHz crystal clock and the 10k resistor connected to pin 1, MCLR. Along with power and ground connections, these are the basic connections necessary to run the program loaded on the PIC.

The PICKit3 is microchip's newest official PIC programmer and while people argue about how good it is, this programmer has...