The 48 Channel Mono/16  Channel RGB LED Controller by Chromation Systems can be used to independantly control 48 groups/channels (up to 120ma per group) of mono-color LEDs or 16 groups/channels of common anode RGB LEDs. It utilizes 3x TLC5940 LED drivers controlled with a PIC 18F2550 microcontroller. The PIC runs at 48mhz, has USB connectivity and controls the drivers through a modified SPI interface. The default firmware uses 8-bit PWM(256 brightness levels) and has a 1.5khz PWM frequency. All LED anodes are connected in parallel and the cathodes are connected to the controller as the outputs sink current. There are 3 connection options for the LEDs, direct soldering, screw down terminal blocks, and headers/housings. 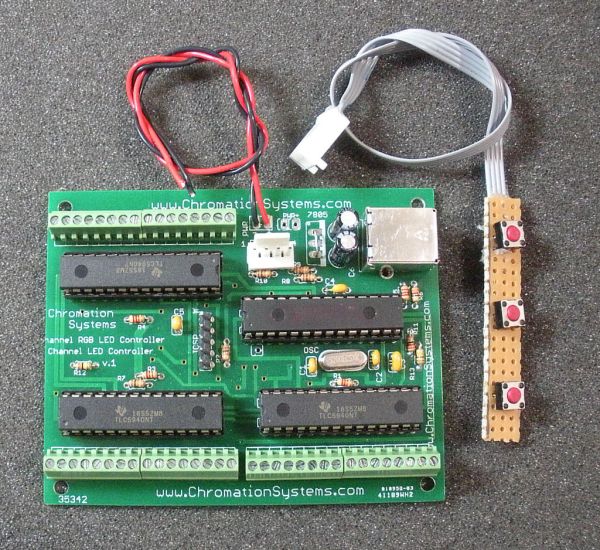 The primary firmware for this device is ColorMotion compatible, which works with the Chromation Systems ColorMotion Software. ColorMotion is used for creating and uploading RGB patterns to the device.  The source code for ColorMotion Compatible Firmware is not available, but a few variations of sample code, including basic RGB LED control and USB communication is available in the project files below.