The basic circuit below will work with any PIC18F2xJ50 microcontroller. You just have to upload the appropriate firmware. Go to Downloads section to find firmware hex files for the microcontroller and the resonator you would like to use. PIC18F24J50 firmware v2.6.3 – all subversions.zip contain the following general use subversions: 4 MHz, 8 MHz, 12 MHz, 16 MHz and 20 MHz, and the following subversions for K8055 adapter: 4 MHz, 8 MHz, 12 MHz, 16 MHz and 20 MHz. PIC18F26J50 firmware v2.7.8 – universal.zip or later enables a wider range of settings. The package contains PC USB Projects HEX Editor v3.0 which makes it possible to set new EEPROM defaults before programming a HEX file.

Yes, the basic circuit may also serve as a super speed microcontroller programmer (you must manually select option 02 – Super speed K8055 or K8055N programmer in PIC Programmer aplication, or set VID = 10CF (hex)). You just need to use a small piece of PCB to solder a DIP socket and a few resistors and two transistors and two capacitors. Don’t mind about the circuit in the plastic box. It is K8055, but you don’t need it! Use PIC Programmer v2.6 and above for PIC18F2xJ50 microcontroller with v2.2 firmware or later, and previous versions of the application for PIC18F2xJ50 microcontrollers with any versions of the firmware 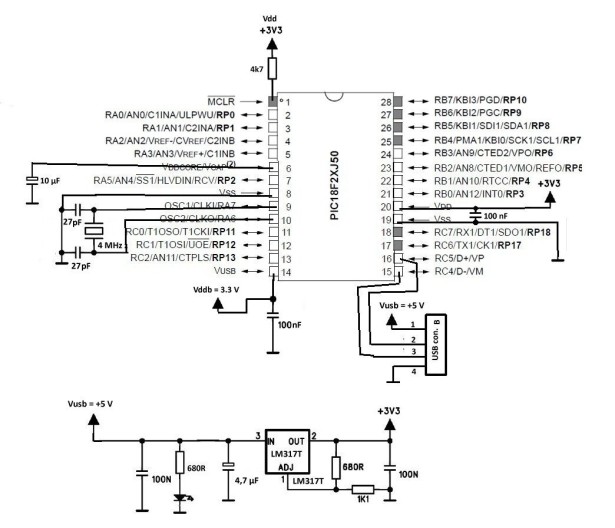