There’re many, who built the Easy Programmer or C-52 EvaluationBoard, asking for the RS232C level converter chip, DS275. Many have changedto MAX232 instead, because of not available in his home. Here is anothersimple and cheap circuit using small signal transistor providing TTL toRS232C level converter. 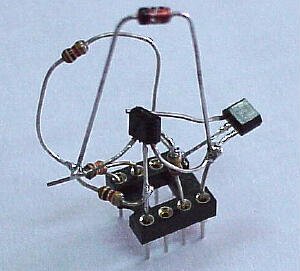 A circuit diagram shown above was used two small signal transistor,NPN and PNP transistors. Dash line separate transmitter and receiver circuit.For those who need only transmitter circuit can use above circuit (andGND (5) signal ). Technically the RS232C is -3V to -12V for logic ‘1’ and+3V to +12V for logic ‘0’. The transmitter circuit uses PNP transistor,BC557. While in mark state the TxD signal is logic ‘1’, Q1 turns off. TxD(pin3) then provides -9V (depends on what converter chip being used forCOM1, say) to RxD (pin2). For space state, TxD control signal then becomeslogic ‘0’, which turns on Q1, the approx. +5V is then fed to RxD (pin2).With this method, while sending data has being made, TxD (pin3) must stableat -9V, say.

Some applications not only need transmitter, but also for receivingdata. The circuit below dash line is a simple inverter circuit that convertsRS232C level back to TTL logic again. When PC sends data to TxD (pin3)pin, logic ‘1’ is -9V, say, Q2 turns off, RxD (TTL) is approx. +5V. Thestart bit makes TxD (pin3) to approx. +9V, Q2 then turns on, RxD (TTL)then becomes approx. 0V.

The circuit above can be used for half duplex transmission. I have testedwith the Easy-Downloader both version and C-52 EVB to replace DS275 chip.It works fine. My student have made the circuit on a small PCB with 8-pinDIP socket. It can replace DS275 directly. 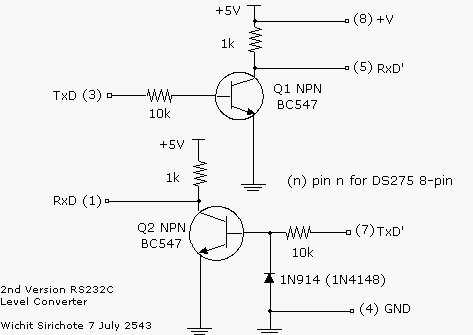 Of course for PIC, as shown in my page we can connect the PIC I/O pindirectly to the COM1 without the need of RS232C level converter chip, say.It’s quite lucky for those who who use PIC chip. But with another microcontrollerthat need such converter, for hobbyists project, I thought above circuitwould be better.

4 prototype boards arrived today. After going over them carefully, I found 4 lines that crossed each other. After some...