Forlinx has published details on the headless sandwich-style OK1028A-C SBC with a FET1028A-C module powered with a 1.5GHz, dual-core, Cortex-A72 LS1028A. The SBC comes with the support for the LVDS interface to enable HMI (Human-Machine Interface) applications. 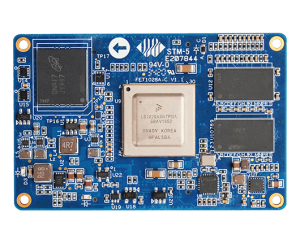 The FET1028A-C module has the support for five 2.5GbE ports but the OK1028A-C SBC is limited to five 1GbE ports. The OK1028A-C is equipped with a display interface and TSN (Time-Sensitive Networking). TSN is the technique that is often used as an economic alternative to proprietary Fieldbus technologies. It provides Ethernet time synchronization for guaranteed latency and Quality of Service (QoS).

The SoM provides a 4-port TSN switch with 2.5GbE support as well as support for a fifth 2.5GbE port and a GbE port. Five of these native GbE ports can be configured by SerDes with SATA III and 2x up to 8GT/s PCIe 3.0 in various combinations with SGMII and QSGMII Ethernet.