The SC14453 has been created for mid and high end desktop phones and extends Dialog’s portfolio – alongside Dialog’s SC14452 and SC14461 – of award winning Green VoIP ICs, which now contains devices to support entry level through to high end designs.

“VoIP is fast becoming the de facto standard for business and enterprise communications,” said Dr. Asmund Tielens, Vice President and General Manager at Dialog. “Business user demands have meant that higher performance audio and higher resolution colour touch screens will be an integral part of next generation VoIP phones. The SC14453, with its best-in-class audio and exceptional graphics capabilities, is perfectly positioned to give our customers a competitive edge.” 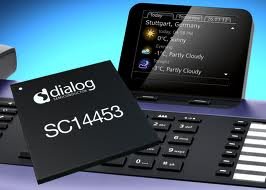 Dialog semiconductor is aiming for business phones with its latest VoIP chip.

The chip comes in a 15x15mm, 228-pin LLGA package, with standard and secure variants.

There is a development kit, and Linux-based software to go along with it.