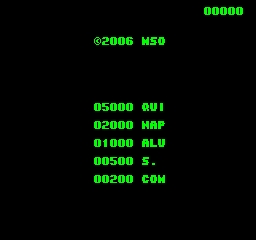 The circuit diagram is shown to the right. You can get a larger version or a PostScript version if you prefer. The design is based around a Microchip PIC16F628A microcontroller. At the time of writing, this device is available for less than one pound from (among others) Crownhill Associates. All the work, including colour video and synchronisation signal generation, is done in the microcontroller, and so there are no other active components. Purists who contend that the LED is an active component may replace it with a light bulb.

Three buttons with pull-up resistors provide the game controls. We have shown the buttons wired in parallel with a 9-pin D connector, into which you can plug an Atari-style digital joystick. You can of course dispense with either the buttons or the connector if you wish.

The connector to the above left of the microcontroller is for in-circuit programming of the device. You may need to change this part of the circuit to suit your programmer. Note that MCLR must be pulled high and RB4 pulled low for normal operation.

READ  Save space on your PCB with TRACOPOWER!

The microcontroller derives its clock from a 20MHz crystal. The load capacitor values shown should be suitable for most readily-available crystals. A ceramic resonator could be used instead of the crystal, and should be accurate enough to allow most televisions to lock on to the resulting signal.

On the right, a handful of resistors and capacitors match the audio (top right) and video (bottom right) signal levels to those required by the television. Crude anti-alias filtering is provided for the audio. The LED lights when the microcontroller takes the RGB select pin on the SCART connector high: this occurs shortly after power-up, and so the LED provides some indication that the circuit is functioning correctly.

For more detail: PICs in Space

A popular power source for portable devices is a single lithium-ion cell with 4.2V at full charge and 2.8V at...