If you are into PICs, you maybe tried one day or another to build a software video processor, either for fun or for a project.
If you tried to generate video signals, you surely know some of this web pages :

This projects are fun, but I wanted to build a general purpose software video processor, to drive a TV screen just like a GLCD could be. 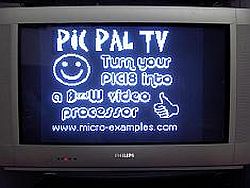 I kept the idea to use a 2-resistor ladder as a fast and cheap digital to analog converter, and started to work on the software.

Since the video screen has to be mapped in memory, only PICs with enough RAM are concerned, that’s why the PIC PAL Library is for PIC18 family only.

The PIC must be clocked at 32 Mhz with a 8 Mhz crystal, to get the 64 µs horizontal synchronization timing of the PAL system.

The library generates a 625 lines interlaced PAL video signal, and can display up to 248 vertical lines of 128 pixel. Any video display device with a PAL video composite input should be able to display the picture generated by the PIC.

Because timing is critical, the part of the software producing the video uses in-line assembly mixed with C.

You can download the full mikroC project, including the library source code.

Here is the user’s manual of the PIC PAL Library : 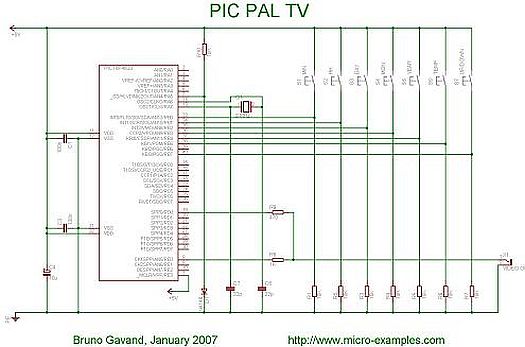 The PIC is clocked with a 8 Mhz crystal

D1 is used as temperature sensor connected to PIC ADC

Video signal is mixed through R8 and R9

Switches with pull-downs are used for settings

You can connect the video out signal directly to the composite video input of your TV.

1. Quite a few POV clocks out there, why is this special? Well, mainly because it's mine. There are quite...