This project is aimed to design a ‘Sleep and Wake-up Assistant’. Different from a normal alarm clocks which can only make noise, this alarm clock is designed to wake up a person in a comfortable and effective way by involving sound, light stimulation, motion detection and vibration. The functions of this alarm system are: 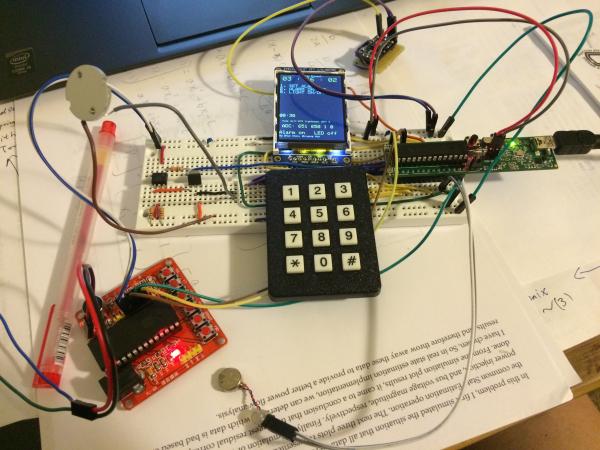 ( i ). This system has an LED light. Before the user sleep in the night, the LED can be used as a reading light. The lightness is adjustable and can be timed to gradually dimmed as the user falling asleep. In the morning, the lightness will be gradually increased before the set wake up time (e.g. 30mins ahead) to simulate the sunrise.

( ii ). An accelerometer will be put on the bed or under the pillow to monitor the moving pattern of the user before wake him/her up. There will be a window before the user’s set alarm time, once the system considers that the user is in a light sleep phase, it will wake the user up even before the set time.

( iii ). To help the user wake up effectively, a vibrate motor will be placed under the pillow. It will start working when the alarm start.

( iv ). This alarm clock has a more active ‘Snooze’ mode comparing to a normal alarm clock can just timing. After the setting alarm time has passed, the accelerometer will keep detecting if the user is still on bed by tracking is there any movement.

( v ). Sometimes, people may wake up late and found out the missed a very important event. If someone told them while waking them up, it would be much likely that they can get up in time. This system allows the user recording a few sentences and use it as alarm sound. For example: “Wake up! You have an exam at 9 am!”

( vi ). The situation of a short nap is also considered when designing the system. When the user set the alarm time to be within only 2 hours later, the system will only simply wake up the user at the set time.

Introduction If you've dabbled with PIC18F microcontrollers and the USB Generic HID standard before (perhaps you've even tried my Building a...