If you’ve dabbled with PIC18F microcontrollers and the USB Generic HID standard before (perhaps you’ve even tried my Building a PIC18F USB device project) then you will have noticed that there is a lot of complexity in supporting USB on both the PIC18F and the Windows host-side of things.

Getting beyond the basic steps of reading a switch and flashing an LED (how many projects have you built to flash LEDs?!) is actually quite a large task with a steep learning-curve.

To make things easier on the hobbyist who wishes to delve into more exciting projects, I’ve developed a framework for producing USB devices which covers both the Windows host-side application development and the PIC18F firmware itself. The framework consists of a Visual Studio C# class library (which handles all of the intricacy of dealing with the Windows specific SDKs and operating system requirements), a windows reference application (which demonstrates how to use the class library and acts as a testing front-end for the library), a simple USB hardware reference design and (last but not least!) a PIC18F4550 firmware which communicates with the class library. 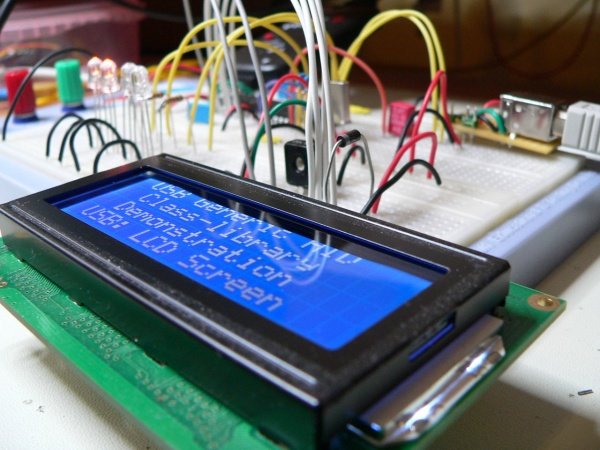 In essence this means that you can rapidly develop and test a USB device and the Windows host-application with a minimum of USB Generic HID protocol knowledge. The class library gives you a very simple interface to the USB device from C# and the firmware serves as an example of how to create the specific software needed on the PIC for your device design.

The framework includes the ability to pass commands and responses to and from the USB device as well as bi-directional bulk-transfer of data allowing you to build more complex data-capture applications which require more information to be passed quickly from host to device and vice-versa.

In this article I will go over each element of the framework and show how you can use it to develop your own creative USB devices.

For the impatient, here is a quick YouTube video of the framework in action. The LCD driver example shown in the video can be downloaded below:

Version 3 of the USB library and firmware is now available (2011-10-16). I’ve made several major and minor enhancements to the library as well as some bug fixing. Here is a list of the enhancements and changes:

In addition I’ve also updated all of the circuit diagrams and included a new schematic for the PIC18F2550.

Please ensure that you specify which version of the USB framework you are using when asking for help in the forums.

The reference hardware is extremely simple and can be built on a breadboard if required. I’ve made the pin-out of the hardware identical to the PIC DEM FS USB board available from Microchip to allow you to buy a reference board (if you want to!), you can also use my clone of the Microchip board – the PIC USB Development Board. If you don’t have the time/money/inclination to make a reference board here is a circuit schematic of the minimum required hardware for the reference board for both the PIC18F4550 and PIC18F2550 microcontrollers: 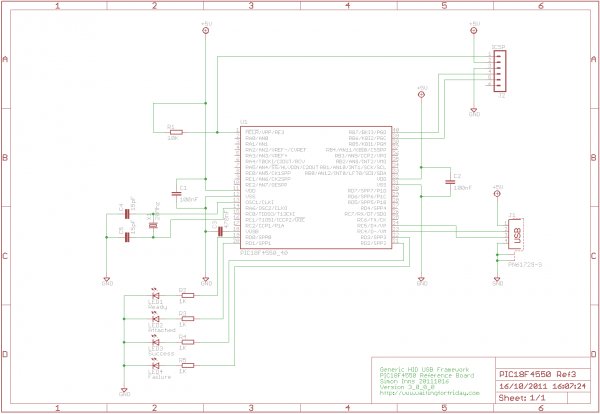 The next picture shows the reference hardware built on an experimenter’s breadboard (using the PIC18F4550):

The reference hardware provides 4 LEDs which are used to show the status of the USB device as it processes the various requests that can be sent to it from the Windows host-application. The 4 LEDs (from left-to-right) mean:

The board provides all you need to add in your own devices and circuity as you require, you can even remove the LEDs, the only part the firmware truly requires is the USB port and its associated hardware.

For more detail: Open Source Framework for USB Generic HID devices based on the PIC18F and Windows

Abstract This application is a very cheap solution for displaying text messages on a solid or semi-opaque surface by using...