With fast development of economy in India, the demand of electricity is higher and higher, and the problem between lag of construction of network and inadequacy of transmission capacity becomes increasingly prominent, which exacerbates the unharmonious contradictions of development between power grids and power generation structure. Some provinces and cities have begun to take power limited policies to alleviate contradiction of the current electricity supply-demand, how to resolve this problem has become imperative responsibility for many power workers. Recently, in order to prevent overloading of transmission lines, domestic power system usually adopts the static, conservative transmission capacity value in design, which is a conservative static value based on the severest weather conditions.

A. GSM SMS
GSM (Global System Mobile Communications) is a global digital mobile communication system, whose coverage is the most widely, phone owners is the largest, and reliability is very high. SMS (Short Message Service) is a kind of short message transmitted. In fact, the information transmission is achieved by receiving and sending text message in the businesses center between mobile phones and other short message carriers, and the businesses center is an independent operating system of GSM network whose main function is submitting, storing, and transferring short message. SMS is a special and important service as well as calling for users by GSM system. In this project, a self-designed industrial GSM module is selected to finish the transmission and the decoding of the monitoring data through AT command and coding of short message PDU (Protocol Data Unit).

B. ZigBee
ZigBee wireless network technology is a new standard launched and made by ZigBee Alliance. The alliance, founded in August 2001, is a fast-growing and non-profit organization, and it aims is to provide consumers with more flexible and easier electronic products. The second half of 2002, four large corporations including the British company Invensys, Mitsubishi Electric Corporation, Motorola and the Dutch giant Philips Semiconductor Corporation jointed together to announce that they would join the “ZigBee Alliance” to invent the next-generation wireless communication standards named “ZigBee”, which became a significant milestone in the development process. In October 2004, the ZigBee Alliance announced a version 1.0 of ZigBee protocol, and in December 2005 version 1.1. ZigBee uses free frequency bands of 2.4 GHz and 900 MHz, and its transmission rate is 20 kbps to 250 kbps. In this paper, the perfect chip cc2430 is selected to design the wireless hardware platforms of ZigBee, a standard ZigBee wireless network module is produced, and a reduced version of ZigBee wireless network protocol is programmed. The Zigbee module and protocol have been successfully applied to power system, medical and some other fields.

ZigBee is the set of specs built around the IEEE 802.15.4 wireless protocol. The IEEE is the Institute of Electrical and Electronics Engineers. They are a non-profit organization dedicated to furthering technology involving electronics and electronic devices. The 802 group is the section of the IEEE involved in Information technology—Telecommunications and information exchange between systems—Local and metropolitan area networks including mid-sized networks. Group 15.4 deals specifically with wireless networking (Wireless Medium Access Control (MAC) and Physical Layer (PHY) Specifications for Low-Rate Wireless Personal Area Networks (WPANs) technologies.

Network Topologies
Depending on the application requirements, an IEEE 802.15.4 LR-WPAN may operate in either of two topologies: the star topology or the peer-to-peer topology. Both are shown in Figure. In the star topology the communication is established between devices and a single central controller, called the PAN coordinator. 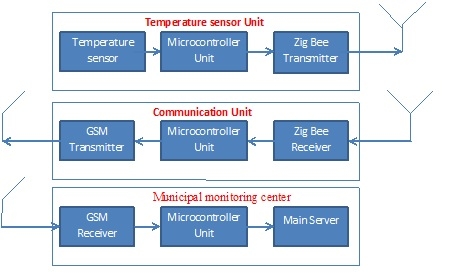 Temperature Measurement
Temperature can be measured via a diverse array of sensors. All of them infer temperature by sensing some change in a physical characteristic. Six types with which the engineer is likely to come into contact are: thermocouples, resistive temperature devices (RTDs and thermostats), infrared radiators, bimetallic devices, liquid expansion devices, and change-of-state devices.

The Overall Structure of Online

For more detail: Online Monitoring of Temperature of Conductors Using Zigbee and GSM