This is an ongoing project to control a number (currently 5) of Lamina Atlas high power (350-500mA) LEDs. Current progress includes: 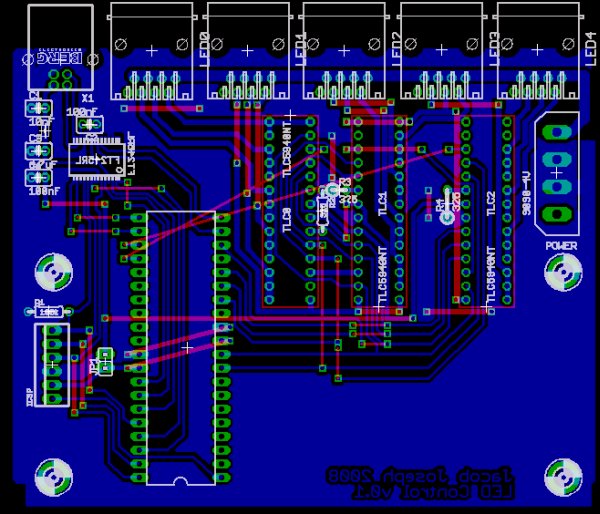 Aside from mere novelty, this project was conceived for a use as a multicolor strobe controller during parties. The current implementation functions yields this, and effective general-purpose room lighting. This naïve implementation achieves approximately 100 frames per second, far in excess of necessity. Effective music synchronization is still in progress, as is a graphical interface.

The Lamina Atlas LEDs are rated with an absolute maximum current of 700mA per color, though all output specifications are measured at 350mA. To simplify the number of components, this design uses three TLC5940 outputs in parallel per LED color, achieving 360mA (3x120mA). It is now my understanding that these LEDs are well-rated for 500mA use, but I’ll likely switch to separate amplification for such an increase rather than adding further TLC5940 chips.

All power for devices other than the LEDS is drawn from the USB bus, so do use a powered hub. Though the devices use small amounts of power, I have only eyeballed that the power utilization stays within the USB spec. Input voltage for the LEDS is provided by the 12V line of a standard. I use a computer power supply. Any supply of more than 8-9V should be enough for the maximum forward voltage of the Lamina LEDs and TLC5940 drivers.

Warning: The TLC5940 chips cannot sink as much current as this design would have you believe. While each chip channel can sink 120mA, not all channels may be used at once unless the input voltage is very low. External resistors are required. To remain within the TLC5940 spec, drop no more than about 1V per color channel at maximum intensity. That is, use external resistors, in the 8-15 ohm range in series on each channel until the TLC5940 chip sinks at 1V.

For good measure, I do use a heatsink on the TLC5940 chips. Switching constant current regulators such as the Supertex HV9910 would make the controller more efficient, and resolve this oversight.

This code is written for a 16F887 PIC, though it could easily be ported to other chips. Currently, only one-way (write from computer) communications is functional. Much of the code needed to read is written, though untested.

A tight loop in main monitors the 245R RD line, indicating new input data. The first byte defined a command, followed by a variable-length set of parameters, which are clocked in immediately. Global state bits are then (atomically) set if, for example, a color update should be performed.

The TLC5940 clocking is performed first by the clkout pin, at OSO/4. Blanking, and all communications with the TLC5940 chips must be coordinated such that commands complete before a blank cycle. These are handled by an interrupt driven by Timer 1. Note that commands are processed only at the next interrupt cycle, introducing some latency. 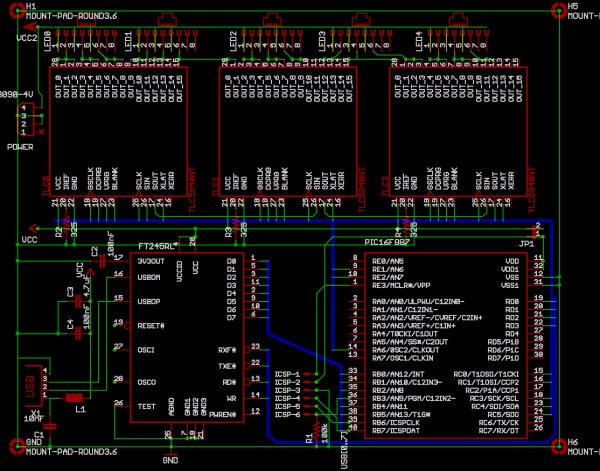 Only after etching this board did I obtain a Pickit 2 programmer. This programmer allows in circuit debugging, but I had used the ICD pins, RB6 and RB7, for data communications. If RD6 and RD7 are substituted for RB6 and RB7 on the PCB, an ICD can be used. Search on ICD hack in main.c With a little effort in Eagle, PORTD should be substituted for PORTB. Myself, I’ll get around to this when I need another PCB.

This is a quick-and-dirty Python interface to the libFTDI library. It utilizes ctypes. Only the subset of functions needed for this project are implemented. Others from the library may be easily added.

The time keeping is provided by DS3231 RTC chip with an integrated high accuracy (± 5ppm) MEMS crystal. This makes...