It’s no the first time that we present a localizer without GPS. We remake the old device with the cheaper SimCom module SIM900. In the previous post we present the GSM section and now we can present the complete localizator.

This system allows for localization without directly using GPS technology; we are able to locate the desired object fairly precisely by using database availability together with the geographic position of the cells themselves. In some country the cell coordinates are not publicly known (i.e. in Italy). If so, where do we find such data? Through Google Maps… Google has been able to store billions of data regarding the location of its clients’ cell phones. 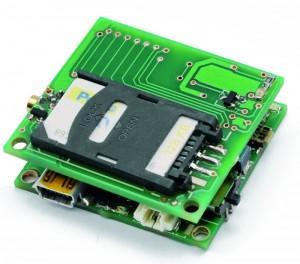 But how does GSM localization work? The radio mobile network is made up of a number of adjacent radio cells, each of which is characterized by an identifier consisting of four data: a progressive number (Cell ID), a code related to the area in which that given cell is (LAC, or Local Area Code), the code of national network to which the cell belongs (MCC, an acronym for  Mobile Country Code), and finally the company code (MNC, or Mobile Network Code), which obviously identifies the phone company itself. For this reason, once a cell name and coordinates are known, and considering the maximum distance allowed between this cell and a phone before the phone connects to a new cell, it is possible to find out, approximately, the most distant position of the phone itself. For example, if the maximum distance has been determined to be one mile, the cell phone can be within a one-mile radius. It can be deduced that the more cells are found in a given area, the more precisely one can determine where the phone is located (up to 200-350 feet). The idea of employing only a GSM device to build a remote localization system occurred to us when we realized that Google Maps Mobile, which had been conceived to allow smartphones equipped with a GPS receiver to use Google for satellite navigation, was extended to all cell phones, as long as they were able to support GPRS or UMTS data. Naturally, this method allows but for a rough estimate: determining the precise position of the cell phone hinges on data regarding the coverage of a given cell which can only be provided by the Google server.

Compared to traditional localizers based on GPS, this device presents many advantages, primarily because it is lighter and less bulky, has a cost lesser and greater autonomy to exercise. This means that about one battery lithium ion, such as 1 Ah, our tracker can be in operation for several days (it all depends on the number of SMS that have to do). A locator based on cellular network may answare more immediately: the GPS receiver may take several minutes to determine its position. Our tracker works battery and thus can be brought on by people who may have the need to ask help or be tracked, but also placed on board motor vehicles (without installation) or simply introduced in goods in transit. To avoid unnecessarily draining the battery, the localizator provides its position via SMS, on requesto with a simple phone call. Among the functions implemented there is the SOS: By pressing the button the localizator sends a text message asking for help, containing the coordinates of position, the sending can be done to a maximum of eight thelephone numbers. When queried or with the autoreport function, sends an SMS with the localization.To know the location of remote device must send an SMS request cell is connected and sends a request (via GPRS) to Google’s site, the latter responds with the coordinates and the figure for the precision. Everything happens in seconds.

The circuit consists of a module GSM / GPRS SIM900 produced by SIMCom controlled by a microcontroller Microchip. The set is divided into two PCB, one containing the SIM900 and the other the micro and charger for the lithium battery. The motherboard mounts the micro and charger, the microcontroller is a PIC18LF6722(U1), it runs in loop waiting for an event that can be the arrival of an SMS (or a telephone call) or the pressure of the Button P1. In the case of receiving an SMS, it acts differently depending on whether a message of configuration or location request. 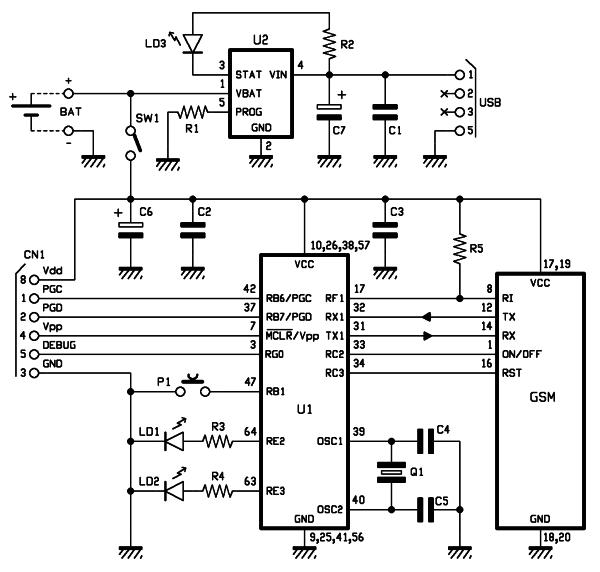 At the request, the PIC controls the GSM module until it is connect in data mode (via GPRS, then on the Internet) to the server Google Maps and send the request position together with the identifier of the network cell which SIMCom is connected, then receive the incoming data from the web. Received data with assumed the position (latitude and approximate longitude) and the accuracy, prepare a text message and forward it to the number made the request by SMS or a combined with the stored alarm function. After receiving these information, the remote unit sends a text message.
The circuit is powered by 3.6 volts obtainable from a battery Li-Ion. To save battery power. the microcontroller firmware provides the possibility, by a specific command, to place the locator in a state of “hibernation” for a period of maximum 240 seconds, and this to limit the consumption micro and put on standby also the GSM module, which remains ON but only in receiving and operating with a reduced clock. The absorption of localizer in standby is only 6 mA. The reducing clock frequency (Slow Clock) is obtained using the command AT+CSCLK= 2. To exit from hibernation, the microcontroller waits for a call, or the expiration of set period (which, as said, can get to 4 minutes): verify if the interval expired or a SMS arrived with a coordinate request or configuration. We conclude the description of functionality of the tracking, saying it detects the motion and trigger actions programmed in such cases, although it has no receiver GPS or accelerometer or other motion sensor: the detection is based on changing cells in the SIM900.