This is the second revision of my PIC based LED binary clock. The original version was the first PIC project I attempted, it used a PIC16F84A to do both the timekeeping and control the display matrix, unfortunately it didn’t keep good enough time and gained about a minute every week. 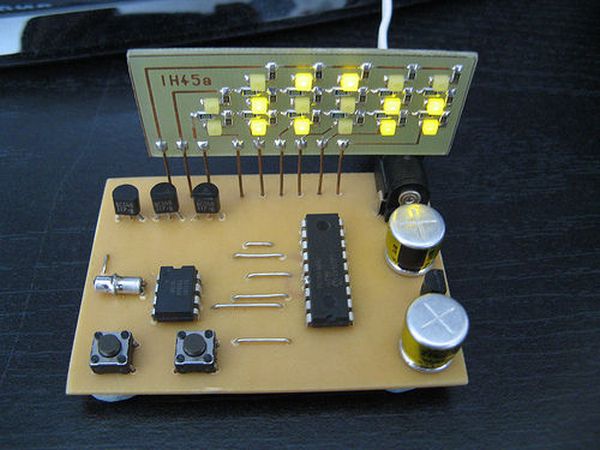 This second version is based around a PIC16F628A running at 4MHz to control the display, it also uses a DS1307 realtime clock chip to do the timekeeping. Every second the DS1307 sends a pulse to the PIC chip, the PIC then reads the internal time from the DS1307 over the I2C bus and then displays the time in binary on the LED display.

The PCB could be made double sided, or as I have done here single sided with 7 wire links soldered in place instead of the top copper layer. It has a 5 volt regulator so could be powered from any 9 – 15 volt DC power supply.

As well as basic PCB making and soldering equipment you will need the following components: 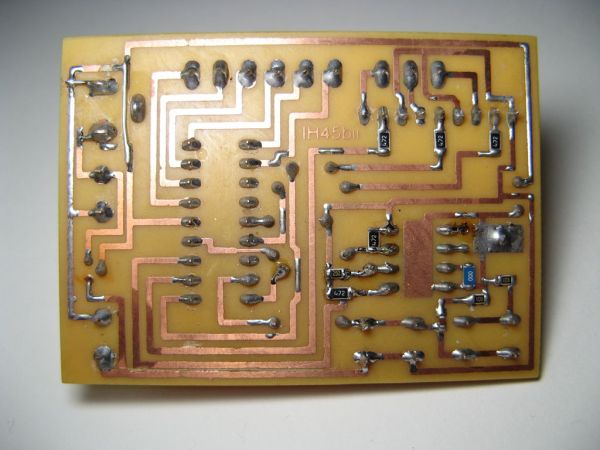 The first step is to make the PCBs, the PCB layout and schematics for the main clock and the display board are provided in Eagle format. The clock PCB is double sided, but the top layer consists simply of 7 links, this means that the PCB could also be made as a single layer with 7 wire links instead, this is the way I chose to make it as I cannot make double sided boards.

It is important to program the PIC chip with the hex file prior to soldering into the circuit as there are no ICSP connections on the board.

Solder the 8 resistors, 1 capacitor and the zero ohm link / backup battery as shown to the bottom side of the main clock PCB.

Next solder the through hole components ensuring to orientate the 2 chips, the 2 capacitors and the regulator correctly.