A microcontroller is a small computer on a single integrated chip that is programmed to control the devices. Most of the embedded-based projects require knowledge about programming the microcontroller. Once students get an idea about the circuit, schematics and their operations, it becomes really easy to program a microcontroller. 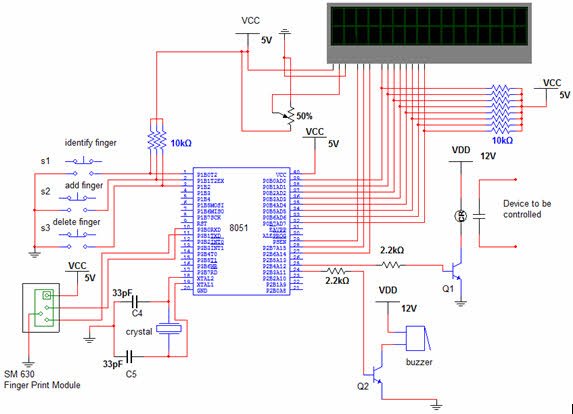 The process involves taking the image of the fingerprint and processing the stored image to get the data, and then comparing this data with the existing information in the database.

The vehicle monitoring system is designed for tracking the location or geographical position of any vehicle on the highways by using GPS navigation system and GSM features.The GSM modem and GPS receiver are both interfaced to 8051 microcontroller. The GPS modem gets the longitude and latitude data, indicating the position of the vehicle, and the GSM modem sends this data to the concerned authority.

Upon receiving a request from a user to the modem, the system sends the information about the position of the vehicle in terms of longitude and latitude.

The user ID card, which is also an RFID tag is scanned through the reader and the information present in the card, is accordingly processed, i.e., the toll amount is deducted from the account of the user

Quiz Buzzer systems are commonly used in schools and colleges during competitions. The process involves giving priority to the person who presses the buzzer at the earliest. However, the problem arises with the conventional buzzer systems if the buttons are pressed simultaneously by two or more persons. In such cases, it is difficult to make a choice, and sometimes the decision can be biased with the human intervention.

The quiz-buzzer system proposed here consists of 8 switches corresponding to eight teams. The output is displayed on the 7-segment display. The buzzer is also devised to give an alarm sound for an infinitesimally small duration of time.

For more detail: Latest Microcontroller Based Electronic Project Circuits in 2014

Recently, I built an energy harvesting circuit based on an ultra low voltage DC/DC step up converter chip (LTC3108) from...