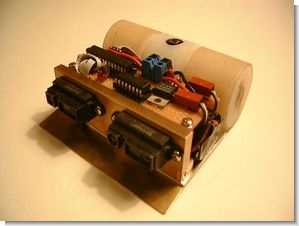 The PIC 16F876 is a very powerful micro-controller. In addition to the hardware features mentioned above, the software for Seeker II is fairly advanced. The main control loop is implemented as a formalized finite-state machine (FSM). Using an FSM eases the code management problems inherit in any complex piece of control software. The states currently implemented are as follows:

In North America, a new form of robotic sumo is starting to gain a following. Started by Bill Harrison (Sine Robotics, http://www.sinerobotics.com), autonomous mini-sumo robots can be simple and inexpensive to build for the beginner, while at the same time providing intense competition for robot builders at a more advanced level. Mini-sumo robots are half the size of regular sumo bots, and compete on a ring that is half the size as well. 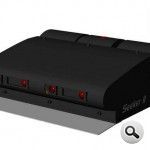 The rules are fairly simple: two autonomous robots face off on a ring that is 77cm across, and the first one to touch outside the ring loses. The ring surface is black, and there is a 2.5cm white line around the outside top edge of the ring. The robot has to fit inside a 10cm x 10cm square tube placed vertically over it when it is in the start position on the ring, and it must weigh no more than 500 grams. The robot is not allowed to intentionally damage another robot, and must not damage the ring. The full rules can be found online at http://www.robotgames.com.

There are a number of mini-sumo kits that you can buy off the internet, but I decided that I wanted to come up with something a little different. And so, after a couple tries and a lot of thinking and design work, a new mini-sumo was born. One thing I did not need to think much about was which micro-controller to use – all my robots are controlled by Microchip PIC micro-controllers.

Several of the hardware features of the 16F876 are used, including:
• Two channel hardware pulse width modulation (PWM) is used to provide precise control over the speed of the two motors, without using up any processor time.
• Four analog to digital converters (ADC) are used to interface to two range-finder and two edge-detector sensors.
• One 16 bit hardware timer (Timer1) is used to increment a 32 bit integer millisecond counter, used for various timing functions.
• In the future, a close-range IR sensor will be added to Seeker II, and the 38 kHz pulse required will be driven by Timer0, an 8-bit hardware timer.
• The hardware UART is used both to program the PIC using the bootloader, and also to run a menu-driven debug system that allows me to test and calibrate the motors and sensors.
• The data EEPROM is used as a simple log to show state transitions – as the robot changes state, the current state is stored. If the robot exhibits strange behavior, I can see what state transitions led up to the behavior, which can be a great aid in debugging. The debug menu provides functions to display and erase the data EEPROM. 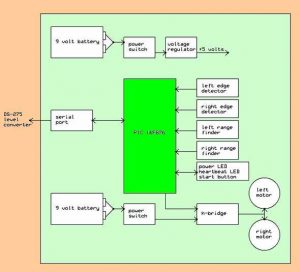 The rest of the electronics in Seeker II are very simple – a 5K pull-up resistor on the MCLR line, a 0.1 uf decoupling capacitor between ground and power on the PIC, a 20 MHz crystal, and a pair of 18 pf capacitors for the crystal. The motors are switched using a Texas Instruments SN754410 quadruple half-h driver chip, which is basically a one-amp version of the popular National LM293D h-bridge. Power to the electronics is provided by a nickel-metal-hydride (NiMh) 9 volt battery, and switched through a National LM2940 5 volt low-dropout regulator. Two capacitors are attached to the voltage regulator as suggested in the data sheet (0.47 uf and 22 uf). Power to the motors is provided from a second NiMh 9 volt battery. Each battery is switched separately using a pair of slide switches accessed from the underside of the chassis.

For sensors, the robot has two range finders and two edge detectors. The range finders are Sharp GP2D12 analog range sensors. They are cheap, simple to interface to, and provide very accurate results without being affected by ambient lighting conditions. The edge detectors are Fairchild QRD-1114 IR sensors. They also filter out most ambient light interference, and in general work exceptionally well.