Back in 2009 I build my first copy of a “worlds most useless machine” from a video I found on wimp.com, it is no longer posted, which was a copy of the real original by Claude Shannon called the ultimate machine.   The original box was built quickly over the course of one weekend and worked for a few weeks.  However the electronic circuit had a few flaws due to me trying to save costs.  I was trying to power the servo’s and the electronics from the same batteries which caused some problems and ended up frying my microelectronic.   3 years later and I decided to revive the box and make some improvements to both the electronics and the operation of the box.  With the original box most people were skeptical when I handed it to them and told them to turn it On, they always wanted to open the lid first.  So I decided to add a lock to the box, so they can’t open it.  The only thing they can do is turn on the switch, which adds to the suspense.   It really is fun to watch people see the box for the first time. 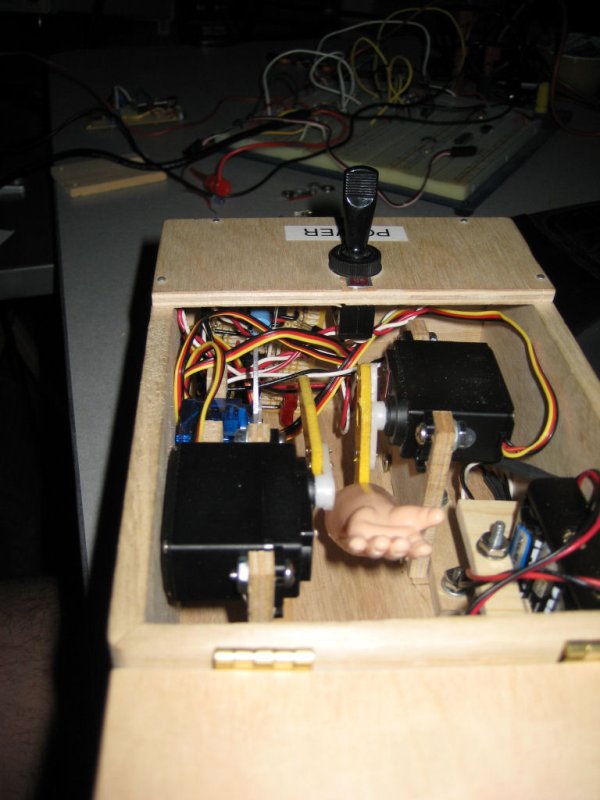 The base box used in the prototype was a cheap wooden box purchased from Michael Craft Stores.  I replaced the lid with a small piece of 1/2″ plywood that I cut to make the two halves.  The side with the switch is nailed on while the flap side was attached with the boxes original hinges moved to the side.  The servo mounts and battery holder are made out of craft balsa wood.

The Microcontroller and switch and powered from a 9V (B1) battery.  Power flows from the battery through the switch to the input of a 7805 (U1) 5V voltage regulator.  The 7805 supplies the 5V that are required to drive the MicroController and Solid State Relays (Opto Isolators).   Once the switch has been turned on and the MicroController has received power a solid state relay (U2) is turned on to Latch on the power switch, effectively shorting out the switch to keep power on even if the switch is turned off.   A Diode (D1) keeps power from flowing back from the solid state relay to the output of the switch.  The Diode is needed so that the microcontroler can read the state of the switch, without it it would always have voltage potential because of the Latched Power.   The State of the Switch which is 9V is also feed to a NPN Transistor (Q1).  The transistor acts as a simple switch to switch a 5V source on and off so the MicroController can safely read the state.