Wifi Robot: A remote control car that can be driven over the internet or with a laptop wirelessly from up to 500m away. It has a live-feed network camera so that it can be driven without line of sight and a horn so that you can honk at people. 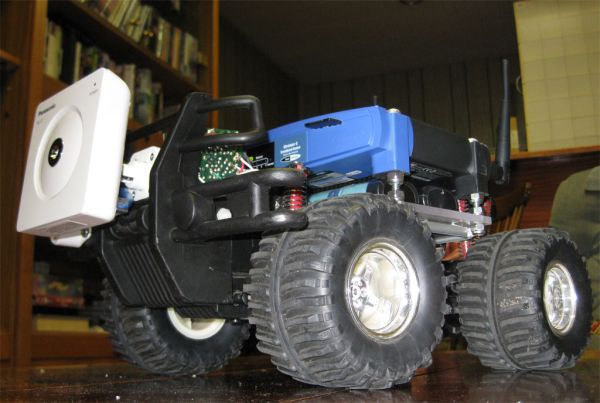 A while ago I discovered the Linksys WRT54GL router. It’s very hacker-friendly in that it runs Linux and some of the hardware has been reverse engineered. A bunch of alternative firmware versions have been written for this router. The version that this project uses is the customizable Linux firmware Open-WRT. Along with great software for this router, a bunch of hardware hacks are possible. With a cheap, hackable, embedded Linux system at my disposal — I knew I had to do something cool with it. So the Wifi Robot idea was born.

The goal of this article is to give a high-level overview of the project and provide some implementation details of the software and electronics. It is not meant to be a step-by-step how-to guide, but there should be enough information for someone with motivation and some background knowledge in electronics and software to be able to make their own Wifi Robot. All of the source code is being released under the terms of the GNU GPL v2, so by all means, use the code, and improve it!

Car
Adding a network camera, router, heavier batteries, extra circuits, and a whole bunch of wires adds a lot of extra weight that the car wasn’t designed for. Because of all of the additions, you’ll need to find a pretty large RC car. Thrift stores often sell RC vehicles (without remotes!) for $3-5. I have bought a number of cars this way for taking apart. Vehicles in the 1:10 size ratio or bigger are appropriate; you probably don’t want to go any smaller. I bought this car for $5 at Value Village.