The Tiny Remoteis a very compact infrared remote control with only two buttons to control an iRobot Roomba. It produces three different infrared control signals that the robot interprets as Clean, Spot and Virtual Wall/Lighthouse. 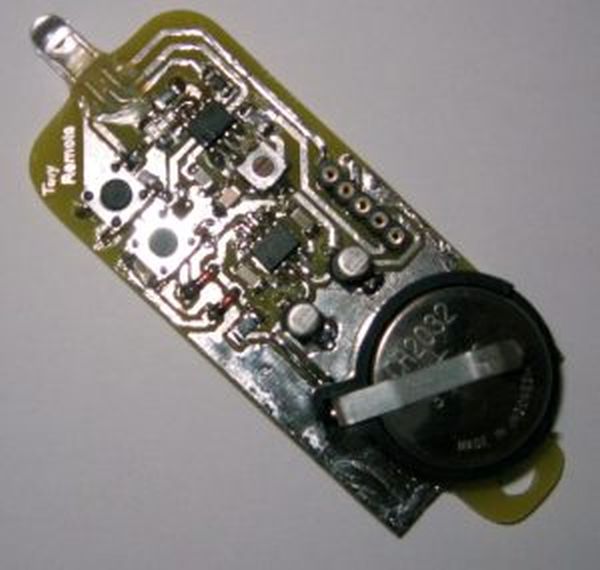 The circuit is built mostly using SMD components to reduce its size, nearly to the size of a keychain and is powered by a CR2032 coin battery.

After having designed the virtual wall, I wanted to be able to remotely control the robot. Most of the work had already been done on the assembler software of Virtual Wallso I was left with the tasks of redesigning the power supply and add two buttons.

The infrared patterns emitted by the remote control are a form of PWM, modulated with a carrier frequency around 38KHz~40KHz. Below is a picture of the lighthouse pattern captured using a TSOP1238 and an oscilloscope.

Transmitting commands on the remote:

No Stop command is included in the remote because it’s not needed! Each command, Clean or Spot, act as start when the robot is stopped and stop when it’s already running.

Using a PIC microcontroller it is possible to output the infrared pattern and generate the carrier frequency. Mixing is accomplished by connecting the LED between the PWM output and the carrier output.

From left to right we have the CR2032 3V coin battery, the power supply based on a MAX619 regulator, the microcontroller 12F629, two LEDs, one emitting visible light and an infrared one and two push buttons. Connected to the microcontroller’s pin 2 (CLKIN) are R1 and C6 that form the RC pair for the PIC oscillator. There’s also a 5 pin header to connect the programmer (an ICD2 or another compatible one). The two diodes D1 and D2 will drive the MAX619 ~SHDN when any button is pressed.