I’m currently mainly working on my new anemometer design but once in a while I get distracted. For example when my Keysight E3645A lab power supply was making so much noise that I could hardly concentrate. That’s when the idea of this fan controller was born.Of course, the best temperature controlled fan in the world doesn’t help if you really need the cooling the fan is providing. But very often a small fraction of the cooling would do just fine most of the time. In my case the supply does control the speed of the fan. But it doesn’t seem to measure the temperature at all but seems to calculate the necessary cooling in a worst-case condition. 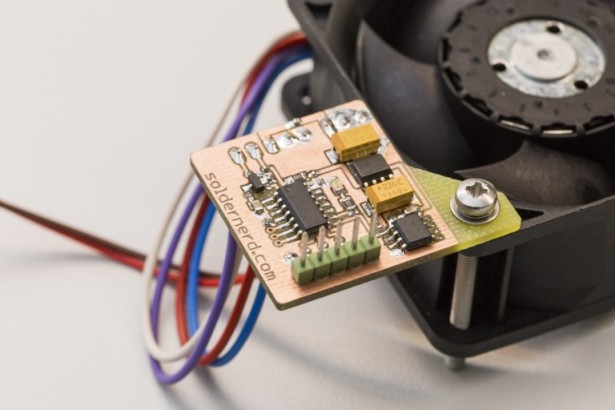 An for a supply that may be rack-mounted together with lots of other heat dissipating gear the worst-case might be quite demanding. But my supply just sits on a shelf at, say, 22 degrees ambiant. And most of the time I’m hardly pulling any current. When working with microcontroller designs it’s rare for me to pull more than a few tens of milliamps. So little cooling is needed most of the time. But the E3645A (this one here does a better job) ran its fan at crazy speeds while the case still had this cold metallic feel to it.  So we can definitely do better.So the first step was to open the supply and to see what kind of fan it uses and how it is controlled. After beaking some seals and opening the case I found a 60x60x25mm 12V fan of Chinese origin. I also found out that the supply uses linear control. So there’s no PWM or anything but the supply voltage just varies in (I think) four steps from 7.4 to 12 volts. Most surprisingly, this voltage is not ground-referenced but symmetric around ground, i.e. plus/minus 6 volts.I was pleased to see that the fan connects to the main board by means of a standard two-pin 100mil header. So I could just plug anything in between the board and the fan.That’s exactly what my first idea was. Stick with the original fan and just put a PWM controller in between. I’ve just recently made some LED dimmers and the technology needed here seemed to be very similar. So Rev A of my fan controller was born.

Here is a simple, versatile project which indicates the level of water and automatically controls it by using PIC Microcontroller. The Water...