Ham radio is a popular hobby and service in which a licensed amateur radio operator explores communications equipment. Typical ham radios do not have bluetooth support, which may be hassle for some. None of the transceiver manufacturers are providing a wireless interface. However, with this ham radio bluetooth interface, communicating and listening to other entity would be easier. 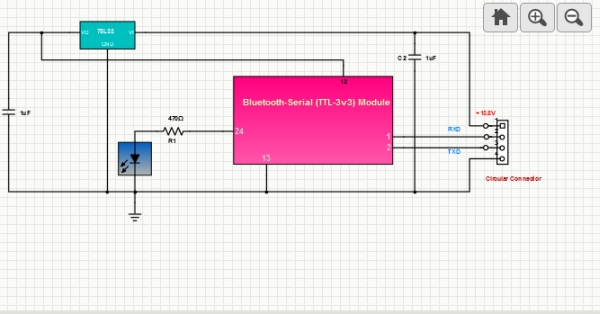 The device uses Bluetooth module and a circular connector. The TE’s CeeLok FAS-T connector is one of the most rugged, small, 10 GB Ethernet, field terminable I/O connector. It has been designed to perform in some of the most extreme environments in the industry, while providing substantial size and weight savings via its small shell size 8-form factor.

The design is simple that anyone can construct it without having a hard time. The device uses a Bluetooth module, a regulator, connector and few passive components. It automatically connects to the PC or any bluetooth supported device when the application is started. Wireless headset would be very useful for ham radio operators so they can freely do whatever they need to do without being stagnant. In addition, a single blue LED indicates power and pairing.

[Any] idea is dead without a good application for it. So “California Dreamin’” USB virtual peripheral could be a very...