Line following robot is the thing to run on the line by controlling the motor of the left and right detected by light, such as infrared drawn in black (7m / m width or so) line. As illuminating the… Electronics Projects, PIC16F84 Line Follower Robot Project “microchip projects, microcontroller projects, pic assembly example, pic16f84 projects, 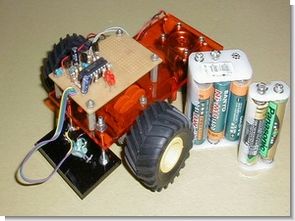 Line following robot is the thing to run on the line by controlling the motor of the left and right detected by light, such as infrared drawn in black (7m / m width or so) line. As illuminating the line, I put the light of the ordinary uses wheat balls of 3 volts instead of the infrared, we used (at the Akizuki) CDS with a diameter of 5m / m the sensor this time. The CDS ON motor twin motor gearbox controls the RB4, RB6 of port B sent to RA1, RA2 of port A of the PIC signal ON when out of the line, the signal OFF when applied to the line, and OFF. LED indicates the state.

Software is a thing of the ordinary, but is attached to the external interrupt RB0 port of B. Motor it indicates that you have entered the interrupt operation (about 30 seconds) LED stops flashing alternately once interrupt enters. The signal of the oscillation sound has placed it out of the RB7 of port B. These and there is not to the wiring, but so have been on board the bull’s-eye half board, you may want to experiment with a favorite circuit later. For example, I am such as to interrupt or light voice. 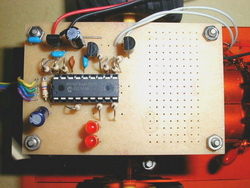 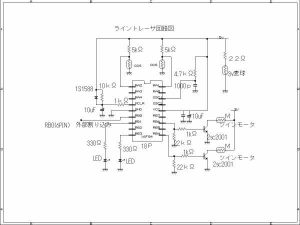