Ever get confused by GMT, or just wish you had a cooler way to keep track of time?  Build a New Earth Time clock!  Using a PIC microcontroller, some code, and a couple discrete parts, you too can have a unique timekeeping device to keep on your desk.

New Earth Time (NET) is an idea for a global time standard.  Like Greenwich Mean Time (GMT), it is the same “New Earth Time” everywhere on the globe at any instant.  Unlike GMT, NET counts time in Degrees and Minutes so as to not be confused with your local time (which is still counted the same way you’re used to).  You can read all about how New Earth Time works at their website, newearthtime.net .

It seems like a cool idea to me, and what better way to support the idea than to build a clock and start using New Earth Time! You can see my prototype NET clock in the picture to get an idea of what’s involved.

Other:
Case (My case came from an old electric blanket thermostat.  I love the cool retro-modern look about it)
Breadboard or Perfboard to construct the circuitry
Hookup Wire
A little bit of Heatshrink (the size of your LED) and a Sharpie Marker.

Because NET counts in Degrees, it is only appropriate to add a Degrees symbol after the Degrees display.

To make your own Degrees indicator, press a piece of un-shrunk heatshrink tubing onto the LED, so that the end of the tubing is about even with the top of the LED lens.  Don’t shrink the tubing!  Leave it just like it is.

Next, take a sharpie marker and color in the center of the LED lens. It usually works best to do this with the LED on, so you can see where you need more ink. It may take several coats of ink to get it dark enough that it blocks light. I find that a “dabbing” motion of the sharpie deposits the ink better that a “dragging” or writing motion.

When you’re done, you’ll have an LED that only lets light out from the edges – just like a Degrees symbol! 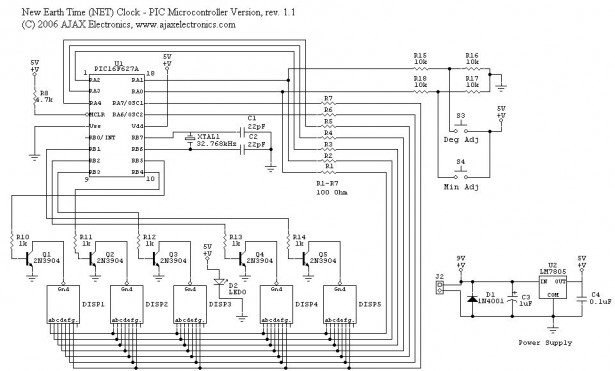 The schematic diagram (see picture) and electronic assembly are fairly straightforward since most of the “magic” happens in the microcontroller code.

Just like any digital clock, the microcontroller uses time-division multiplexing to control five 7-segment displays from only 12 I/O pins.  You can look up this scheme on the internet, but the basic idea is that only one display is on at any given time but our eye perceives all displays to be on simultaneously due to persistence of vision.  The displays are driven by 2N3904 transistors, since the PIC I/O ports can’t sink enough current for 7 LEDs.

In addition to the displays, there are two buttons multiplexed into the display outputs for the clock setting functions.  One button sets NET Degrees, the other sets NET Minutes.

The 32.768kHz crystal is the main timekeeping device for the clock.  You want to make sure you get a high-accuracy crystal, but even then you may need to adjust the value of C1 and C2 to keep time accurately.

I have included a small 5V regulator circuit in the lower corner.  If you have a 5V source already, this isn’t needed.