The proof-of-concept device produced a beam with 50% of light in 36 degrees, and over 90% efficiency.

“Most package manufacturers design their LED packages for maximum light extraction. This means as little manipulation of the light as possible and just letting it leave the LED packages in any direction,” said company CEO James Reeves. 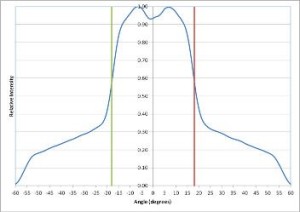 “It helps achieve the highest efficiency figures possible which is important in a sector that is heavily influenced by headline figures on datasheets. But that is never what is needed from the final light fitting, so manufacturers have to use secondary lenses and reflectors to shape the light.”

Instead, of a secondary optic, the firm has used some form of shutter – which is how automotive projector headlamps work – but unlike most shutter technology, blocked light is recycled.

“Within our package we have deliberately interrupted the light path and reflected or refracted the light going in the wrong direction more towards the right direction,” said Reeves. “We have used angled reflective surfaces and specific shape of silicone encapsulate to manipulate the light.”

Just under 10% of light is lost – comparable to similar figures for seconraty optics – even the best are rarely over 92% efficient.

“We wanted at least 50% of the light output to be within a beam angle of 40 degrees and did not specify an efficiency target, we just wanted to see whether it was possible,”

The new Type-C USB connector is the latest addition to the USB connector standards. It offers reversible plugs, direction independent...