The single character LED sign I had been playing with now has a purpose! Shortly after discarding several ideas of having it as a serial display for PC/Server status, or hooking it up to the internet and a webcam, I came up with an actual useful purpose. The sign can be a clock! I have two ‘modes’ planned; traditional numbers and binary. All geeks love binary clocks, but most of us are lazy and would rather read regular ‘ol numbers. 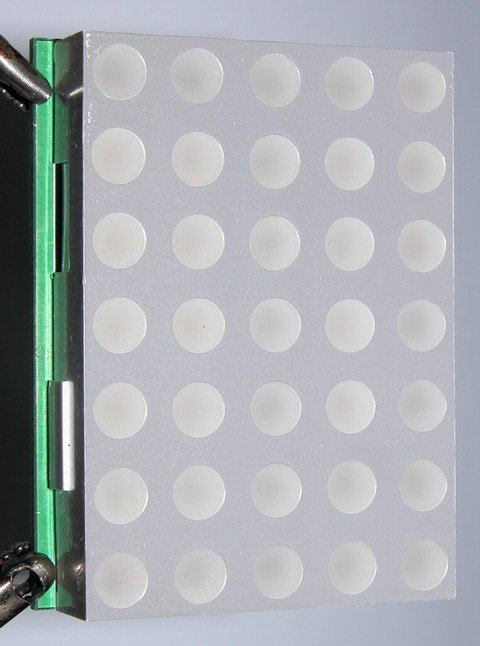 To facilitate the role as an clock, I had to redesign the circuit quite a bit. Two new ICs were added, allowing the LED Sign to keep time, and providing some much needed storage.

The first of the new ICs is a Real Time Clock. Because I’m cheap, I chose the M41T80 from ST Micro. It’s an inexpensive clock, similar to the Dallas DS1307 but lacking a few minor features. First, the clock has no power-on reset detection. It just starts up as soon as power is supplied. The Dall 1307 has a stop bit which gets set if the clock experiences a POR, so the firmware can test if the clock needs to be initialized or not. The T80 datasheet mentions some registers may get set to default values on power up, so I’ll have to read it a few more times to see if there is a way I can check for a POR. Second, the T80 has no support for a separate backup battery. Instead, ST recommends you place a diode in series with the clock, and use a large capacitor to provide backup power. Last, there is no automatic leap year / leap second correction, oh well! 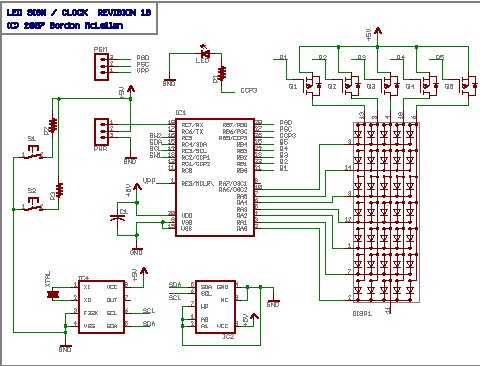 The second IC is a 16 kilobit serial eeprom, similar to the Microchip 24C16, I chose one from Catalyst semiconductor due to lower costs. The eeprom is arranged as eight banks of 256 bytes each. The chip contains a 16 byte write-buffer, I’m not sure if it can cross a bank boundary or not, I’ll program my firmware assuming it can not. The eeprom will be storing character strings related to operation of the LED Sign as a clock, as well as user programmed messages and possibly simple graphics.

I’ve also added some micro switches for adjusting the clock and changing settings, also a 32.768kHz crystal was added to providing the timing source for the RTC.

Vacuum fluorescent display can be a good alternative to a Liquid-crystal displays in some applications. They have a number of advantages...