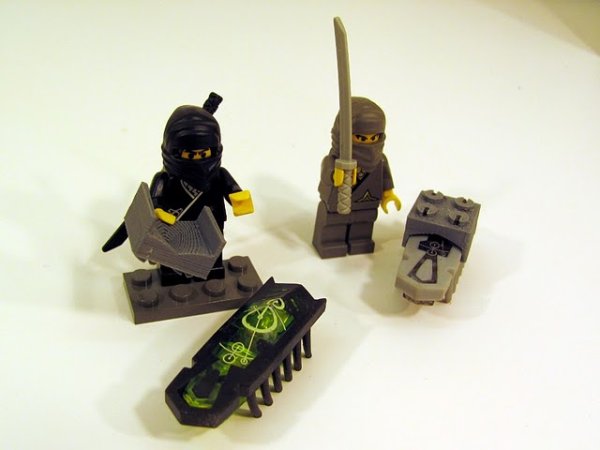 Updated 10/16/2013: Naghi et.al. have improved their vibrobot and released a journal paper about it: “Design and motion analysis of vibration-driven small robot Rizeh.”  You can read more about the new robot on their website.

On his project homepage, Naghi has a schematic that illustrates the simplicity of the design (shown below).  By controlling the motor velocities using pulse-width modulation, you can make the robot more forward and/or turn.  Presumably, reversing the motor polarity (eg. by tying the grounded motor lead to unused pins on a higher pincount microcontroller instead) we could reverse the direction of the motor rotation and get backwards motion (and turning) too.

The robot is remote controlled via infrared (IR) signals received by the IR photodiode.  This solution is low cost, easy to implement, and most people have readily available IR transmitters just lying around (your TV remote).  I’m not sure which IR encoding Naghi’s prototype is using, but I know that adding infrared remote control is a fairly straight forward proposition.  Back in undergrad (goodness, that was seriously 6-7 years ago!?), I built a small robot that was controlled by a Sony TV remote.  My implementation was on a PIC microcontroller in assembly (yikes!), and I implemented it all in only about 8 hours (the night before the semester project was due) — so it’s all very approachable.

Steerable vibrobots (and bristlebots) aren’t exactly new.  There have been several different designs that are steerable and/or remote controlled.  From academia, the Kilobots and I-Swarm robot swarm projects use large groups of steerable vibrobots — videos embedded below.

The one on the right is my favorite.  It is pretty much a standard Bristlebot, but it has the motors offset from the center axis.  It kind of reminds me of a dual-outboard motorboat.  Here’s video of it in operation.

So anyway, Naghi’s idea isn’t really new, but the pancake-type pager motors give it a nice, distinctive faux-wheel look.  Like all the others, Naghi’s design is incredibly small and compact, has a very low parts cost, and could be a good platform to learn the ins and outs of small robot design for a DIYer (eg. basic circuits and embedded programming).

For the unfamiliar, vibrobots are an old concept.  I’m not sure how far back the designs go, but I built my first BEAM vibrobot back in 6th or 7th grade (1995ish).  In fact, this was probably one of the first (ever) robots that I built, and it’s what got me started in robotics and electronics.  It was a basic 1381-type solar engine design.  The solar cell would store up charge in the capacitors until a preset voltage was reached (detected by the 1381), and it would then completely discharge all the stored energy through the motor, creating a long (30 second) bucking bronco.  I still have that robot (pictured below).  I just tested it out by putting it in the sun, and it still works.  The cats came up to check it out while charging.  When it discharged, it scared the bejesus out ’em.  Ha!

Anyway, in 2007 by Evil Mad Scientist Laboratories (EMSL) built a minimalistic vibrobot that was just a pager motor connected to a coincell battery, mounted atop a toothbrush head.  They coined it the “Bristlebot” — shown below.  So essentially, Bristlebots are a subset of of Vibrobots.  In 2009, there was some controversy when Klutz published a book “Invasion of the Bristlebots,” packaged with an almost exact replica of the EMSL Bristlebot (even using the name!) without first consulting the EMSL folks. 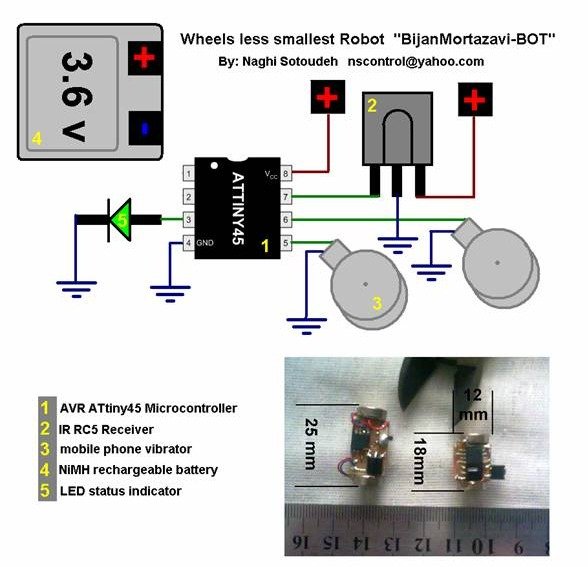 Also in 2009, Innovation First released a commercial version of the Bristlebot called Hexbug Nano (shown below).  [ Sidebar: Do any of you guys know if there is a financial relationship between EMSL and Innovation First?  How about the details? ]   Anyway, it was named one of the top 10 holiday toys of the year in 2009 by Forbes.  Right now, Hexbug Nanos retail for as little as $7.00 each.  There are also plenty of accessories available, and these products are commonplace in most toy stores.

There are also a fair number of Hexbug Nano hacks.  My favorite is IHeartRobotics jousting Lego ninjas riding atop their Hexbug Nano steeds. Creative.

Naturally, with such a simple design and meteoric success, copycats will come out of the woodwork.  In 2010 a knockoff appeared, prompting Innovation First to file an intellectual property lawsuit against their new competitor.  Lem at RobotDreams wrote a good breakdown of the situation.   I really don’t know what to make of that… The Hexbug Nano concept has been around for so long that I cannot imagine Innovation First snagging a utility patent; perhaps they just had a design patent on “cutesy bug vibrobot”?  Then again, IANAL.