Increasing Outputs from a Clock Source

In digital electronics, fan-out is defined as the number of gate inputs that the output of a single logic gate can feed. It is very important in digital systems for a single logic gate to drive other gates or devices. In this case, a buffer can be used between the logic gate and the devices it will drive. Clock buffer is also called as fan-out buffer. The IDT clock buffer clock divider and clock multiplexer portfolio includes devices with up to 27 outputs. Differential outputs such as LVPECL, LVDS, HCSL, CML, HSTL, as well as selectable outputs, are supported for output frequencies up to 3.2 GHz and single-ended LVCMOS outputs for frequencies up to 350MHz. 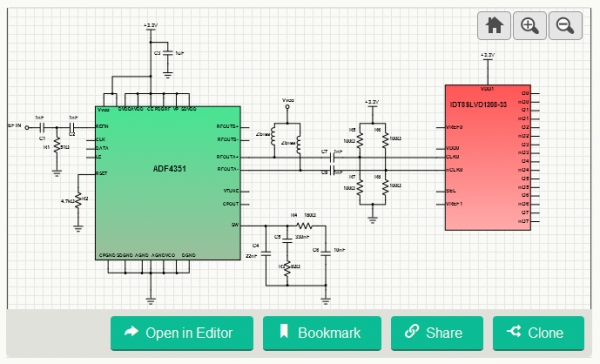 Modern digital systems often require many high quality clocks at logic levels that are different from the logic level of the clock source. Extra buffering may be required to guarantee accurate distribution to other circuit components without loss of integrity. Many systems require low jitter multiple system clocks for mixed signal processing and timing. The circuit shown in interfaces the ADF4351 integrated phase-locked loop (PLL) and voltage-controlled oscillator (VCO) to the ADCLK948, which provides up to eight low voltage differential signaling (LVDS) outputs from one differential output of the IDT 8SLVD1208-33. The IDT8SLVD1208-33I is characterized to operate from a 3.3V power supply. Guaranteed output-to-output and part-to-part skew characteristics make the IDT8SLVD1208-33I ideal for those clock distribution applications demanding well-defined performance and repeatability. Two selectable differential inputs and eight low skew outputs are available. The integrated bias voltage reference enables easy interfacing of single-ended signals to the device inputs. The device is optimized for low power consumption and low additive phase noise.

Fan-out buffers and clock dividers are general-purpose clock building block devices that can be used in any number of applications. They are ideal for clock and signal distribution in a large variety of systems, from personal computers to consumer electronics or industrial systems, as well as high-performance networking and communications systems.

For more detail: Increasing Outputs from a Clock Source

PIC18F4550 USB DEMO INTERFACE BOARD PROJECT This project / USB hardware is quiet easy to make at home with few...