This project combines a GPS receiver module, a MicrochipPIC microcontroller and a Secure Digital memory card to make a GPS data logger.

With a large capacity and reasonably long battery life it is a very useful device for logging GPS position for example for mapping with OpenStreetMap. 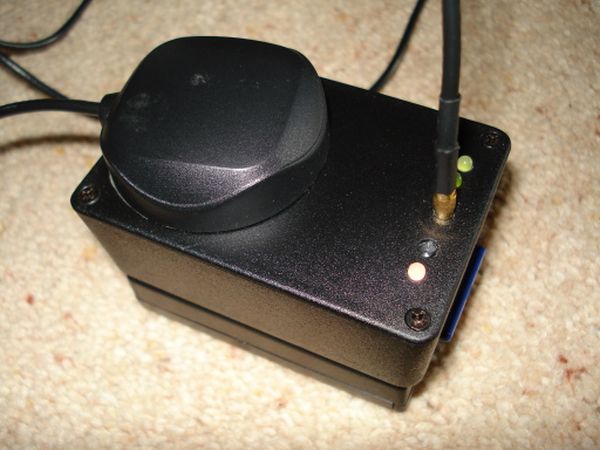 In this picture the complete GPS data logger can be seen. On the top right hand side from front to back are:

On the right hand end of the box the end of the SD card can be seen poking out. At the bottom is the battery box which is almost exactly the same area as the base of the main box.

The data from the GPS is logged every second with the raw NMEA sentences being written to the SD card. The data written to the card is the GSA, GGA, RMC and GSV sentences which by excluding the carriage returns this should never exceed 512 bytes per second. The data contains:

The total active power consumption is about 40mA to 45mA when active which in theory should give 48 hours on rechargeable batteries with 2000mAh capacity. In practice I have measured a time of 40 hours.

The power consumption in standby is 0.6mA which means that the theoretical life is 4 months which would probably exceed the self-discharge time of the batteries.

I have been using a 512MB SD card which allows for storage of 1 million data points which is more than 11 days. Any capacity card up to 2GB could be used without a change to the software.

With the main box opened the contents can be seen with the bottom of the lower PCB visible on top. The base of the GPS module is on the left, the connectors fit through a hole in the PCB. The SD card socket is on the right with the connections through the PCB underneath the glue holding it to the PCB. 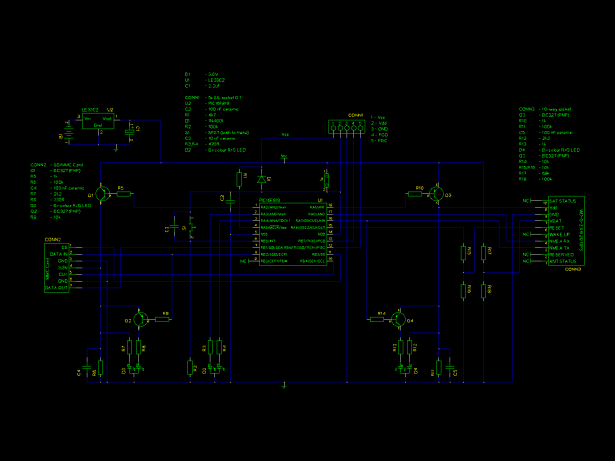 The holes in the PCB fit over the bolts in the bottom of the box that bolt this box to the battery compartment. The top PCB has similar holes and fits over bolts glued to the lid of the box. Between them (fitting over the end of the bolts) are lengths of plastic tube as spacers.

With the PCBs disassembled the contents are clearer. The two PCBs are connected by ribbon cables and 0.1″ SIL plugs/sockets (10-way for the GPS and 7-way for the SD card). The black cable still connecting them is the GPS module antenna connector to the MMCX socket on the lid of the box.

The PIC microcontroller is in the middle of the top PCB with the components arranged around it very much like in the circuit diagram. The SD card components are generally on the left and the GPS module components on the right. The ICSP programming connector is at the bottom and the voltage regulator at the top.

The LEDs and switch are glued to the inside of the top of the box with wires to the PCB. The MMCX connector is also glued on with a cable to the GPS module.

The PIC software is written in assembler and based on earlier projects using RS232 and SPI interfaces. The RS232 part receives data from the GPS module and the SPI part writes it to the SD card. In between there is time to look at the data and flash the LED red, orange or green depending on how good the GPS position is (no fix, 2D fix or 3D fix).

The PIC runs at 8 MHz using the internal oscillator. The RS232 receive and transmit functions operate at only 9600 baud and the SD card writes at 500 kbps. There are no interrupts used because there is lots of time to receive the data from the GPS and write it to the SD card. The sleep function does use the switch to interrupt it and wake up when it is sleeping. When it is operating the switch interrupt is disabled and the flag is polled once per cycle.

The data is written to the SD card in blocks of 512 bytes (the native SD card block size). One block is written each second and padded to 512 bytes with zero bytes. Starting and stopping is recorded by a blank block in the SD card. There is no file system on the SD card so it needs to be read byte by byte (easy in Linux using a USB adapter and reading the raw device). To read the card I have a simple C program that extracts the NMEA data and writes one file for each time that the box was awake.