Forlinx has launched the OK1028A-C SBC, alongside a FET1028A-C module, which is designed based on Cortex -A72 featuring dual-core processor LS1028 A up to 1. 5G Hz. It features on-board 2GB DDR4 RAM and 8GB eMMC, can support 5 Gigabit Ethernet ports with TSN, 2 CAN-FD, USB3.0, UART, SPI, IIC, LVDS, TF card slot, SATA3.0, Headphone peripheral sources, and preserved with M.2 Key B for 5G module, mini PCIe for 4G module, and M.2 Key E for WiFi module. This is coming after Forlinx launched the headless OK1043A-C and OK1046A networking SBCs last year, which are powered by NXP’s quad-core, Cortex-A53 LS1043A, and quad -A72 LS1046A SoCs. However, the older SBCs do not enable video output, and you can only carry out configuration via a computer or laptop either through a UART interface or a web interface. To solve this problem, Forlinx released the new OK1028A-C which offers both a display interface and TSN (Time-Sensitive Networking). 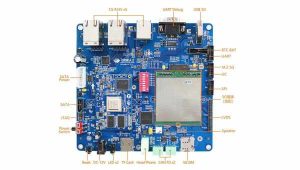 The OK1028A-C is based on the FET1028A-C, and features 5x GbE ports with TSN, a microSD slot, USB 3.0 host port, 2x CAN-FD ports, SATA III with SATA power, and a UART debug DB9 port. It features an LVDS interface which enables a PWM backlight control and a headphone jack and speaker. The OK1028A-C also enables a mini-PCIe slot that supports an optional 5G module and a M.2 B-key slot which supports an optional 4G module, both with the help of a SIM card slot. Available also is an M.2 E-key module with PCIe Gen2 which supports an optional, dual-band WiFi module. If offers additional interfaces like JTAG, SPI, 3.3V UART, and 2x I2C. The board offers a 12V jack with power and reset switches, 2x programmable LEDs, and an RTC with battery. The OK1028A-C SBC runs Ubuntu 18.04 with Qt 5.9.9 with the development of HMI applications. The OK1028A-C can be applied to Industrial IoT, TSN, SD-WAN, 5G CPE, edge computing, gateway, IP-PBX, smart factory, information security, intelligent transport, power management,