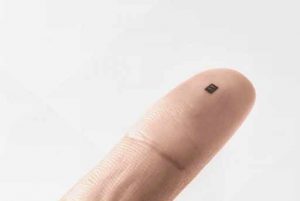 The product is a software-free programming SoC, which will greatly reduce the technical threshold. Any developer can easily build their own wireless applications without worrying about learning complex Bluetooth protocol stacks and embedded programming languages.

The package size of this SoC is as small as 2.0mm x 2.5mm, making it an ideal solution for the next generation of wireless beacon or wireless sensor applications.

IN100 integrates low-power Bluetooth 4.2 technology, supports LE broadcast and private protocol broadcast modes, and the format is compatible with mainstream iBeacon, Eddystone and WeChat Beacon. Developers only need to configure the pre-defined ID and broadcast parameters in the one-time programmable (OTP) memory of IN100. As long as the device is turned on, it will operate as a Bluetooth beacon and broadcast with the preset ID information .

IN100 also supports various types of sensor interfaces, including analog signals and single-bus digital pulse counting interfaces. Developers can easily connect IN100 to analog or digital sensors and configure sensor thresholds. Once the threshold is reached, they can wirelessly issue alarms or broadcast raw sensor data through its Bluetooth beacon working mode.