THE TOP 10 OPERATIONAL AMPLIFIERS ON SNAPEDA


The operational amplifier – or “op amp” for short – is a common building block in analog electronics. Whether you’re a professional electronics designer or just getting started, it is likely you’ve used an op amp in your designs. 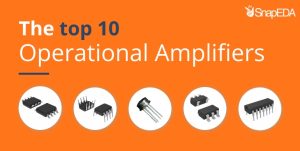 Invented in 1941 by Karl D. Swartzel Jr. of Bell Labs, the op amp was originally built with vacuum tubes and was invented to perform mathematical operations in analog computers, hence how it earned its name. Now, op amps are used in all kinds of applications, for everything from signal conditioning, filtering, as well as for complex mathematical operations such as integration and differentiation. They form the basis of many modern analog electronic circuits because they are cost-effective, perform optimally and are readily available.

Op amps are commonly available as integrated circuits (ICs). They have input and output terminals capable of giving out a larger version of voltage signals that are being passed through them. They can be designed to act as a voltage amplifying device when used with active components such as transistors and passive components like resistors and capacitors to provide the desired response.

When signals pass through discrete elements in an analog circuit, they tend to decrease in amplitude—their voltage level decreases, but an op amp can help buffer and boost the amplitude of such signals, hence, delivering a signal that is useful at the output.

Op amps are very adaptable and versatile to many electronic circuits. They are used in audio and video applications, voltage regulators, precision circuits, analog-to-digital and digital-to-analog converters, and many other applications.

The LM741H is a general-purpose operational amplifier that comes in an 8-pin TO-99 package with a nominal supply voltage range of ±15V. It has a large signal voltage gain of 200V/mV and bandwidth of up to 1.5MHz. Its input and output come with overload protection. This op amp also features no latch-up when the common-mode range is exceeded. It is a direct, plug-in replacement for other op amps like the 709C, LM201, MC1439, and 748 in most applications.