Previously, I made a Pickit 3 clone – (See previous Blog Post). It works well, but I have often wondered just how little of its circuitry was needed to program and debug the boards I make. For instance – I primarily use the newer 3.3V PIC32 processors, so I really don’t need the ability to alter the voltage like the standard Pickit 3 can. I also have no real need for programming on the go, or even to provide power to the target MCU to program. Knowing this – I decided to see what I could do to remove the circuitry I didn’t need, yet still have a functioning programmer/debugger.

After a little research and looking at what Microchip had done with their starter kits, I arrived at the following schematic, which is based on their Pickit On-Board: 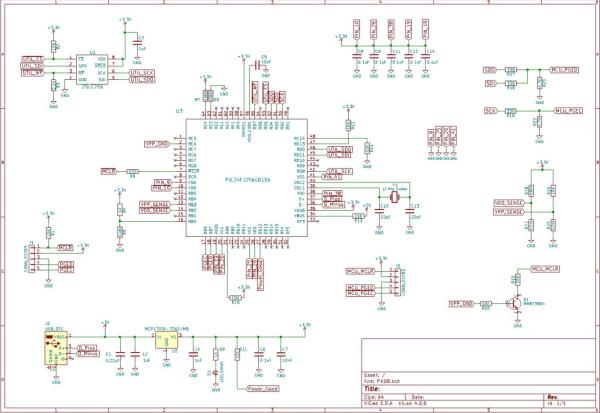 Here is a link to a PDF of the schematic: PDF Schematic

This circuit looks to be the same basic underlying Pickit 3 circuit, but with some “faking” of inputs to mimic missing circuitry. For instance – the OTG programming switch would normally be on pin 21, but instead it is simply pulled high as there is no switch to pull it low. VPP_SENSE and VDD_SENSE are simply fed to the PIC by way of voltage dividers, as is the 2.5 volt reference at pin 16.

As it appeared I had everything I needed, I went about laying out the PCB. Since my ultimate goal with this project is to simply include these parts on my prototype development boards so that I can program and debug with an on-board device, I did not spend a lot of time routing the board. It is a quick and dirty that I am using as a proof of concept. If I intended to make these for long term use, I would have spent some time laying it out properly.