This post provides the ADC code using PIC16F877 microcontroller. This code is written in C language using MPLAB with HI-TECH C compiler. You can download this code from the ‘Downloads‘ section at the bottom of this page.

It is assumed that you know how to interface LCD with PIC16F877 microcontroller. If you don’t then please read this page first, before proceeding with this article. 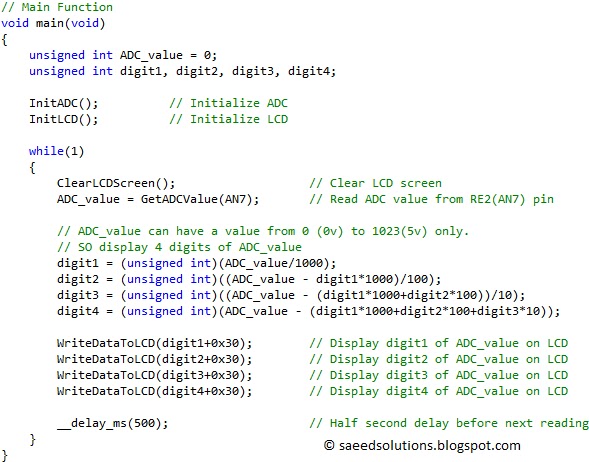 In the main function, ADC is initialized for all ADC input pins (from AN0 to AN7) using InitADC() function. After ADC, LCD is initialized using InitLCD() function. After that, in the while loop code reads ADC value from AN7 channel after every half second and converts this integer value into 4 digits. And those digits are displayed on the LCD screen. In this way, after every half second new ADC value is updated on the LCD screen.

The code used to initialize ADC input channels is shown below. 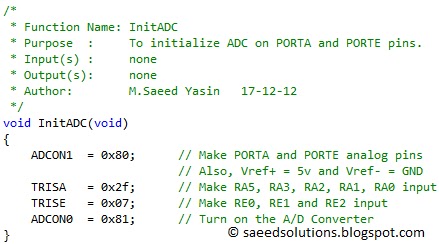 InitADC() function should be called in the start of main function to initialize ADC input channels. This function declares PORTA and PORTE pins as analog pins, meaning that all of them can be used as ADC input pins and they are not digital pins anymore. You can change this setting if you need more digital pins.

The function used to read ADC value from input pin is shown below. 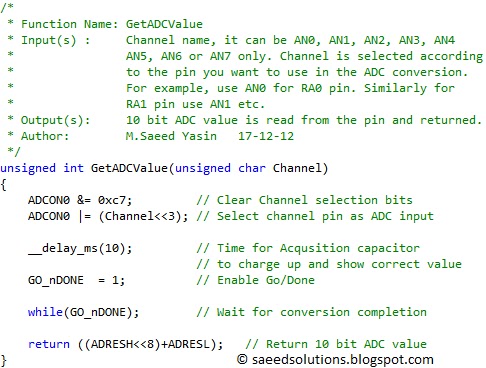 You can use this ADC code library in your projects. You can leave your comments in the comment section below.

ADC code using PIC16F877 was compiled in MPLAB v8.85 with HI-TECH C v9.83 compiler and simulation was made in Proteus v7.10. To download code and Proteus simulation click here.