The initial project goal was to develop the fading algorithm which was successfully achieved. This time the idea was to drive a Prolight 3 Watt RGB LED and place it inside a nice white globe! On the right is a picture of the first prototype board eith a small board attached that doesn’t belong to this project. 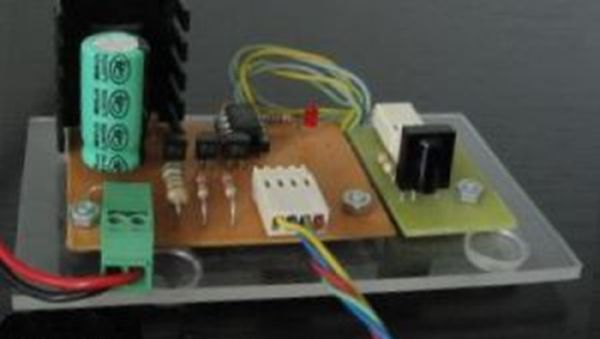 The circuit is basically the same with the addition of 3 BS170 mosfet transistors to drive the LED and a powerful 5V regulator. The PIC is the same but the code has a small big difference, explained below!

From left to right we can see the power supply based on a 7805 5V 1A regulator, the microcontroller and finally on the right the three mosfets that will drive the LED. Click the image to enlarge.

Each mosfet can drive a maximum 600mA through its drain but according to Prolight each LED (red, green and blue) can only sustain 300mA which makes this mosfet perfect for the job.

Summing the 3 LED currents we get 900mA not counting the current consumed by the PIC and the 7805 itself which should be around 3 or 4 mA. The 7805 is able to supply 1A of current with a proper Heatsink.

When S/PDIF became available in the Teensy Audio Library I thought this might be the solution to ground loop problems...