The PIC16F887 is a product of Microchip. It features all the modules that modern microcontrollers normally have. For its low price, wide range of application, high quality and easy availability, it is an ideal solution in applications such as the control of different processes in industry, measurement of different values etc. A list below includes only some of its key features.

Most pins of the PIC16F887 microcontroller are multi-functional. For example, the fifth pin of the microcontroller is marked as RA3/AN3/Vref+/C1IN+ which indicates that it has the following functions:

The following tables refer to the DIP40 PIC16F887 microcontroller.

As any attempt to explain the operation of the CPU in detail would take us too far, we are not going to do it at this stage. Anyway, it is important to point out that the CPU is manufactured in RISC technology as this fact may be crucial when deciding which microcontroller to use.

The PIC16F887 features three types of memory: ROM, RAM and EEPROM. Each deserves to be separately discussed here due to their specific functions, features and organization.

ROM is used to permanently save the program being currently executed. This is why it is often called a ‘program memory’. The PIC16F887 has 8Kb of ROM (8192 locations in total). Since ROM is made with FLASH technology, its contents can be easily changed by providing a special programming voltage (13V).

No further explanations are required as the whole process is performed automatically by means of a special program installed on the PC and a simple electronic device called the programmer.

Similar to the program memory, the content of EEPROM is permanently saved, even when the power goes off. On the other hand, unlike ROM, the contents of EEPROM can be changed during the microcontroller operation. This is why this memory (containing 256 locations) is perfect as a permanent storage for some of the results created and used during the operation.

This is the third and the most complex type of all microcontroller memory modules. It consists of two parts: general-purpose registers and special-function registers (SFRs). All of them are divided in four memory banks to be explained later in the chapter.

Although both groups of registers are cleared when power goes off and both are manufactured in the same and act in a similar manner, they do not have many things in common when it comes to their functions.

General-purpose registers are used for storing temporary data and results created during operation. For example, if the purpose of a program is to count something (products on the assembly line, for example), it is necessary to have a register which stands for what in everyday life is called ‘sum’. Since the microcontroller is not creative at all, it is necessary to specify the exact address of some general purpose register and assign it that function. Make sure that the value of this register is incremented by 1 after each product passes through a sensor. This is how a simple program is created.

The microcontroller is able to execute this program as it knows what the sum to be incremented is and where it is stored. Similarly, each program variable must be preassigned some of the general-purpose registers.

Special-function registers also occupy RAM locations, but unlike general-purpose registers, their function is predetermined during the manufacturing process and cannot be changed later. Since their bits are connected to some on-chip modules, such as A/D converter, serial communication module, etc, any change of their contents will directly affect the operation of the microcontroller or at least some of its modules. For example, the ADCON0 register controls the operation of A/D converter. By changing its bits it is determined which port pin is to be configured as a converter input, the start time and speed of conversion. Furthermore, each SFR register has its own name (both registers and their bits), which considerably simplifies the process of program writing. Since high-level programming languages contains a list of all SFR registers with their exact addresses, it is sufficient to specify the name of a register in order to read or change its contents.

Another feature of these memory locations is that they have their names (both registers and their bits), which considerably simplifies the process of writing a program. Since high-level programming languages can use the list of all registers with their exact addresses, it is enough to specify the name of a register in order to read or change its contents.

The RAM is partitioned into four banks. Prior to accessing any register during program write (whether to read or change its contents), it is necessary to select the bank containing it. Two bits of the STATUS register are used for bank selection, which will be discussed later. To make dealing with SFRs as simple as possible, the most commonly used registers have the same address in all banks and therefore can be easily accessed.

It may be difficult to deal with banks when you write a program in assembly language. On the contrary, when you write a program in higher programming languages, such as Basic, and use compilers such as mikroBasic PRO for PIC, it is sufficient to specify the name of a re gister you need. Having this information, the compiler is capable of selecting the appropriate bank as well as to include appropriate instructions into the code during the process of compiling. You have been using only assembly language so far and this is the first time you use the mikroBasic PRO for PIC compiler, isn’t it? This must be a wonderful news then.

A part of RAM used as stack consists of eight 13-bit registers. Before the microcontroller starts to execute a subroutine (GOSUB instruction) or when an interrupt occurs, the address of the instruction to be executed next is pushed onto the stack, i.e. one of its registers. As a result, the microcontroller knows from where to continue regular program execution when a subroutine or an interrupt execution is complete. The address is cleared after the return to the program and one stack location is thus automatically available for further use.

Note that data is always circularly pushed onto the stack. It means that after the stack has been pushed eight times, the ninth push overwrites the value that was stored with the first push. The tenth push overwrites the second push and so on. Data overwritten in this way is not recoverable. Since the programmer cannot access these registers for write or read and there is no bit to indicate stack overflow or underflow condition, it is necessary to pay special attention to it during program writing.

Let’s do it in mikroBasic…

The first thing to be done by the microcontroller, when an interrupt request arrives, is to execute the current instruction, then to stop the regular program execution. The current program memory address is automatically pushed onto the stack and the default address (predefined by the manufacturer) is written to the program counter. The location from where the program proceeds with execution is called an interrupt vector. For the PIC16F887 microcontroller, the address is 0004h. As seen in figure below, the interrupt vector should be skipped during regular program execution.

How to Use SFRs

You have bought the microcontroller and have a great idea how to make use of it… There is a long list of SFRs and their bits. Each of them controls some process within the microcontroller. It really looks like a big control table with a lot of instruments and switches. Now you are concerned about whether you will be able to learn how to use them all? Probably not, but don’t worry because you don’t have to. Powerful devices such as microcontrollers are similar to supermarkets: they offer many things at low prices and it is up to you to choose what you need. Therefore, choose the area you are most interested in and learn only what you have to. When you get a full understanding of hardware operation, study SFRs which are in control of it (there are usually a few of them).

The performance of all devices is controlled by an appropriate control system and the microcontroller is no exception to the rule. One has to be familiar with such systems in order to be able to use devices properly. Of course, we are talking about SFRs where the whole story about programming starts and ends.

The following text describes the core SFRs of the PIC16F887 microcontroller. Their bits control different modules within the chip and therefore are described along with processes they are in control of. 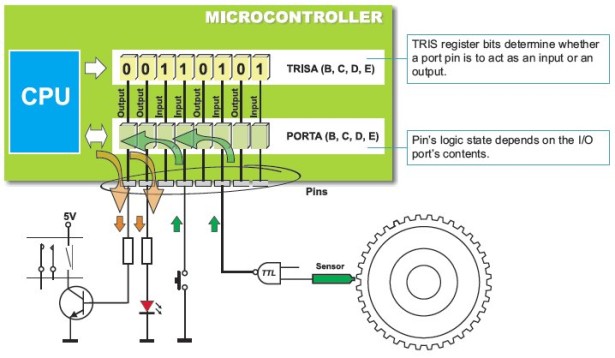 The STATUS register contains the arithmetic status of data in the W register, reset status and bank select bits for data memory.