This is an Instructable showing you how to integrate Twitter in your embedded application. Watch this Instructable in Action http://www.instructables.com/id/PIC-KICK-TWEET-1/

Stuffs your need to complete this Instructable with ease:

For Beginners I would like to brief you to about Processing, MPLABX and PIC KICK….

Processing (or processing.org as known on the web) is a an opensource programming language and environment for people who want to create animations and interactions with a variety of devices and other applications with ease. Initially targeted at artists and designers with no prior programming experience for prototyping, today it is also used by students, researchers, hobbyist and  even professionals to rapidly prototype their ideas by making desktop applications without breaking a sweat. The language is itself based on the popular programming language Java but you need not know Java to start Processing. Processing runs on Windows® OS, MAC® OS and Linux.

MPLABX IDE is a graphical, debugging toolset for all of Microchip’s product line of microcontrollers and memory devices.It includes a feature-rich editor, source-level debugger, project manager, software simulator, and supports Microchip’s popular hardware tools.Based on the open-source NetBeans platform, MPLAB X runs on Windows® OS, MAC® OS and Linux, supports many third-party tools, and is compatible with many NetBeans plug-ins.

PIC KICK is an embedded system development board by ENTESLA for Microchip’s 40 pin 8-bit microcontroller. It is a low cost kick start board designed to help professionals, students and amateurs to explore the capability of PIC16, PIC18 architecture and practice application development for various interfaces with minimal hardware reconfiguration. It features a USB-Serial converter on-board, leds,buttons,16×2 Character LCD, Analog Input using a potentiometer and USB. It comes pre-programmed with the ds30Bootloader which makes it easy to program via usb-serial port. And yes.. you can power it using your workstation’s USB port.

Download the attached images to clearly view the steps mentioned above.

The most critical step is done now. You now need to create you application before you can start accessing the tweets!

As mentioned before, we are going to display the tweets on the 16×2 CLCD present on the PIC KICK development board. To accomplish this you need to write a firmware for interfacing the on-board PIC18f4520 microcontroller with CLCD and routines for transmitting and receiving data on the UART. This seems to be a challenging job for beginners. Thankfully ENTESLA provides libraries with demo codes for these peripherals. The user can use these libraries as reference or use them in their applications for rapid prototyping.

If you are eager to set the PIC KICK in action without making any changes in the firmware jump to the next step..otherwise..

The ready-to-use code for the twitter application project for PIC18f4520 can be found as a .zip attachment to this Step. The code works with MPLABX and C18 compiler. You need to download MPLABX with the C18 compiler and install it before you want to make changes to the firmware.

The firmware provided is pretty straight forward and is well commented. 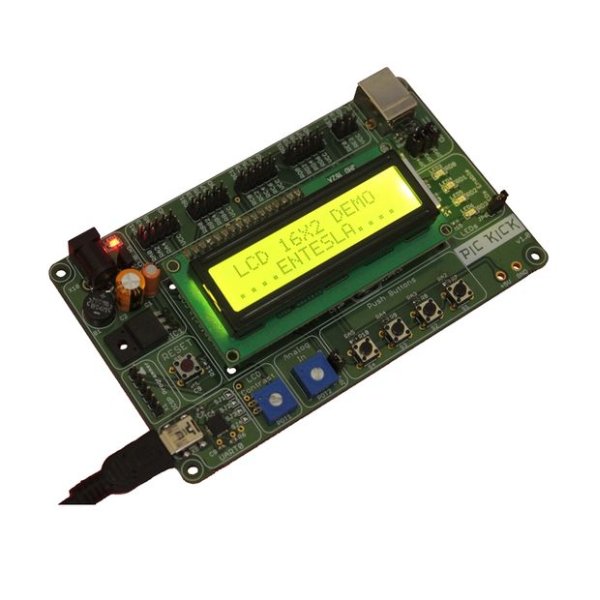 The PIC KICK development board comes pre-programmed with the ds30 bootloader. You can flash the microcontroller with the code easily via the USB-UART bridge on-board. You need not buy/build a separate programmer.