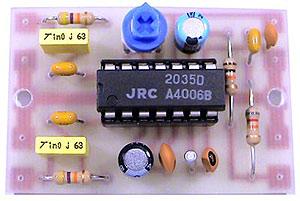 HI-FI Stereo Encoder / Multiplexer
This stereo encoder is the perfect solution for those looking for a high quality stereo sound transmission at a low cost. This stereo encoder produces an excellent crystal clear stereo sound and very good channel separation that can match with many more expensive stereo encoders that are available on the market. It is all possible thanks to a 38KHz quartz crystal that controls the 19kHz pilot tone, so you will never have to calibrate or re-adjust the circuit.
NJM2035 offers superb quality and is manufactured by NJR CORPORATION (JRC), a subsidiary of New Japan Radio, a company that is known as the world’s best manufacturer of high end professional audio semiconductors. This transmitter will work with any mono FM transmitter including TX300 and TX500 which are available on our website. The whole circuit may easily fit on a small 1” x 1.5” printed circuit board allowing to fit in places where space is limited. While building your stereo encoder please take your time and always double check with the schematic to make sure that all the connections are done correctly. If you have any questions, comments or suggestion we will be glad to further assist you.

How Does Stereo Encoder Work?

Pre-emphasis stage is achieved by using two 47K resistors and two 1nF capacitors. This helps to eliminate the noise that is produced during the FM transmission of your audio signal.

Second stage that is built around NJM2035 is a digital encoder. All of its internal blocks except for two audio amplifiers (pins 1 & 14) that act as separators are created using digital circuits. The first digital circuit is a 38KHz oscillator that is generated by using external 38KHz crystal (pin 7), 10pF capacitor (pin 6) and 100pF bypass capacitor (pin 5). Once 38KHz frequency is generated it is then buffered and divided into two 19KHz signals with a phase difference of 180 degrees. Once that is done these two frequencies are connected with two time division MPX digital alternating switchers ,one for each audio channel. Here audio channels are switched between each other with a total frequency of 38KHz. If you would be able to slow this frequency to 1Hz per second you would be able to hear that this all but a trick. During the first half of the second you would hear the left audio channel and during the second half of the second you would hear the right audio channel. Due to the fact that the channels are switched with a fast frequency of 38KHz per second our brain is unable to recognize that these channels are really switched and receives this as a continuous audio signal. At the same time another signal from the 38KHz oscillator is divided by half into 19KHz. This signal is called a PILOT tone because it will help a stereo decoder on the receiver’s part to slice the MULTIPLEX signal (mixed L and R audio channels) and separate them back into left and right audio channels.

The third stage is a mixer that consists of 33uF and 100nF capacitors and 82K and 10K resistors. The role of this circuit is to mix the multiplex subcarrier and pilot signals together. The multiplex subcarrier signal that is coming out from the pin 9 of the NJM2035 IC is the sum and difference of both left and right audio channels that are switched at 38Khz rate. The PILOT signal that is coming out of pin 8 is a 19KHz frequency that is used to distinguish what channel is currently being switched and without which stereo decoding would not be possible.

How to Connect a Stereo Encoder to your FM Transmitter

1) First test your FM Transmitter and make sure that an audio signal is properly transmitted on your desired frequency. Once that is done turn off your transmitter and disconnect its audio inputs.

2) Connect left and right audio outputs from your audio source to the inputs of your stereo encoder.

4) Turn on your transmitter, FM receiver and audio source (making sure its audio volume is not too loud), and apply voltage supply from a single 1.5 battery cell to a stereo encoder.

5) By now you should hear a stereo sound. Adjust 50K potentiometer making sure your L-R balance is set to the middle and adjust the volume of your audio source making sure an audio signal is as clear as possible.

This is a simple countdown-timer-on-a-chip project - you program the PIC, attach some buttons and a pair of 2-segment LEDs,...