LONGi Solar has announced that it has achieved a new monocrystalline silicon PERC (Passivated Emitter Rear Cell) world record conversion efficiency using commercial wafer (M2) dimensions that exceeds 24 percent for the first time, according to tests carried out by the National Center of Supervision and Inspection on Solar Photovoltaic Product Quality (CPVT) in China. 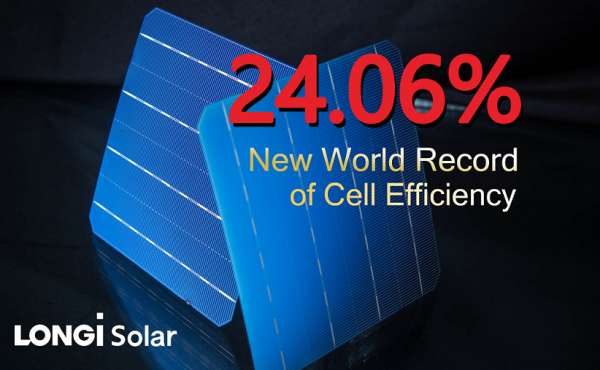 LONGi Solar has made great strides in setting world record PERC solar cell conversion efficiencies as we demonstrate the continuing ability to provide high-efficiency products to the global solar market,” stated Li Wenxue, President of LONGi Solar. “Our latest record solar cell conversion efficiencies also endorse the success of our R&D investments, which have set the benchmark for the industry in recent years.

In April 2017, based on selective emitter technology, which has been widely used in practical mass production, LONGi Solar reported a monocrystalline silicon PERC cell conversion efficiency of 22.17 percent (tested by CPVT), which effectively supported the supply requirements of the Phase 3 requirements of China’s ‘Top Runner’ solar installation program.

In October 2017, LONGi Solar broke the world-record efficiency of monocrystalline silicon PERC cell in commercial dimensions with 22.71%, while the original record was broken by Fraunhofer-ISE with 22.61 percent. In the same month, in accordance with the MBB (Multi Busbar) technology, the cell conversion efficiency was increased to 23.26 percent and tested by CPVT, which was the first to breakthrough the 23 percent efficiency barrier.