Being a human is far easier than being an artificial machine. The things we take for granted sometimes are some of the toughest tasks to give robots. Take, for instance, something as simple and mundane as handling objects of different sizes and weights. We as humans really do not care about how we are able to carry objects and swing them in almost any directions, we just know that it’s something we can do even without thinking, probably because in our fingertips lies other information that goes beyond size and weight, like texture, friction, shape etc. 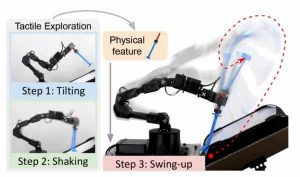 This however is not an easy task for robots because before a robot can swing any object, it has to first learn about the object’s friction and center of mass. Getting them to handle a single object might even be easy, but handling and swinging different objects of multiple sizes and weights are an entirely complex task.

A team from MIT’s Computer Science and Artificial Intelligence Lab (CSAIL) have developed a robotic arm that can use a pair of grippers to pick up objects, estimate its size and weight, and swing it into nearly any desired pose.

As applications for robotic manipulation shift from industrial to service tasks, the need for robots to deduce the physical properties of objects increases. To cope with the diversity of objects and tasks in the real world, robots require models that can quickly infer the physical properties of objects with as few interactions as possible and without explicit supervision”, says MIT CSAIL. “We present SwingBot, a robot system that identifies physical features of held objects from tactile exploration, providing crucial information for a dynamic swing-up manipulation. The goal of SwingBot is to enable a robot to swing up an unknown object to a desired pose (0°~200°) after performing a single exploratory action.

Read more: MIT CSAIL’S SWINGBOT LEARNS THE PHYSICAL PROPERTIES OF AN OBJECT TO SWING IT INTO NEARLY ANY DESIRED POSE