1.1  What is a Microcontroller?

1.2  Why are Microcontrollers used? 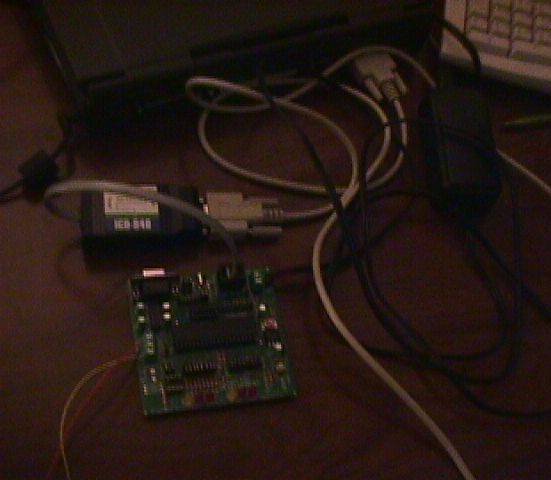 A microcontroller is a compact standalone computer, optimized for control applications. Entire processor, memory and the I/O interfaces are located on a single piece of silicon so, it takes less time to read and write to extrernal devices.

1.2.   Why are microcontrollers used?

Following are the reasons why microcontrollers are incorporated in control systems:

Note: It is assumed that the user has the following common electrical equipment: 1×8 pin ribbon cable, alligator clips, soldering iron and solder.

The PIC16F877 chip has to be powered at all times when its being programmed and running an application.

Caution: Make sure you wire the – and + ends of the adapter of the to the right pins of Jumper 2. Do not plug the adapter to 110V/AC outlet before you wire the power to the board. In order to avoid cheking the leads with a voltmeter everytime, its always a good practice to label the leads for future reference.

b.Connecting the Flash PIC Development Board to a PC through ICD-S:

After we put power on the FlashPIC development board, now we are ready to program the PIC16F877 chip.

Now that we have our hardware setup, we are ready to write the code and transfer the .hex files to the PIC16F877.

6. The software setup is complete. We can type the source code and compile it and transfer the file to the PIC chip as illustrated in Figure2.0-3. After single clicking the “compile” command button on the toolbar and generating the .hex file, we can single click the “program chip” command button.

8. Since the software is tested now the ICD-S can be disconnected and the Development board can be powered up and the .hex file can be run without being connected to the computer.

In this section, properties of PIC16F877 microcontroller,CCS compiler, ICD-S, the reference book “Embedded C programming and the microchip PIC” are briefly explained to give a general idea; it may seem confusing for a first time reader who is not familiar to microcontrollers technology or C programming. However, as the funtionality of the components such as timers, A/D converters, I/O Ports are explained in detail in Section 3 as they are being used in the experiments, the fundemental concepts would be better understood and, the reader can flashback to this section to view the schematics and the specifications.

PIC16F877 is one of the most commonly used microcontroller especially in automotive, industrial, appliances and consumer applications. In Figure –1, the block diagram of the PIC16F877 is illustrated.

branches which are two cycle

The peripheral features of the PIC16F877 are:

can be incremented during SLEEP via external

Usually, a microcontroller by itself is not sufficient to perform the intended tasks. For instance, an oscillator chip is necessary to time the programmed instructions. In order to investigate the capabilities or to test a given microcontroller, obviously it is vital to build the proper circuitary. Example: potentiometer and a power supply to simulate analog inputs or LEDs to simulate the digital outputs. Hence, some hardware and sofware vendors provide the microcontroller with the supplemantary circuit elements on the same breadboard. These boards are called Development Boards. One can also build a development board himself/herself if he/she is willing to go through the painsaking process of building the circuit.

– RS232 through a 9-Pin D-Shell as well as screw terminals and a jumper header.

bytes of EEPROM and up to 1.5K of Internal RAM (depending on processor

– Up to 8, 10 bit, Analog Inputs, using either internal or user supplied reference.

– 9 I/O controlled LEDs, 8 of which are jumper selectable.

– A universal clock socket allows for “canned oscillators”, as well as a variety of

– 0.1” centered headers provide for simple connection to the processor special

– A 6-pin, ICD connection is provided for in-system programming and debugging.

This connection is directly compatible with the Microchip ICD, ICD2 and CCS

ICD-S programming hardware. Flash PICs can also be programmed through

– Termination is provided for 5VDC output at 250ma

The CCS PCW compiler is specially designed to meet the special needs of the PICmicro MCU controllers. These tools allow developers to quickly design application software for these controllers in a highly readable, high-level language.

ineffective. As an example of the limitations, the compilers will not permit

pointers to constant arrays. This is due to the separate code/data segments in

the PICmicro MCU hardware and the inability to treat ROM areas as data. On

the other hand, the compilers have knowledge about the hardware limitations

and do the work of deciding how to best implement your algorithms. The

are available. Standard format resembles the Microchip tools and may be

required by some third-party tools. The simple format is easier to read. The

debug file may either be a Microchip .COD file or Advanced Transdata .MAP file.

option in the Windows IDE.

The usage of the copiler is explained in Section 2.0 Getting started. The reference book “Embedded C Programming and the Microchip PIC” comes with a demo version of the compiler.

The ICD-S programmer is the hardware/firmware interface to burn the .hex files to the Microchip PIC. The ICD unit works with CCS’s PCW debugger or CCS’s stand-alone ICD control software. CCS’s PCW debugger is a very robust debugger integrated with PCW, and provides very detailed debugging information at the C level. The stand-alone control software allows you to quickly program target chips using ICD’s ICSP. The control software also lets you update the ICD unit’s firmware without having to remove the chip from the ICD unit. (Using these software tools requires you to have loaded the CCS-ICD firmware onto the ICD unit, which is loaded by default).

Authors note 01/22/04 : I found it odd that prllc.com does not provide a freeware program like “AVR bootloader.exe” for FlashPIC Development board as they do for Atmel AVR development board, that would enable programming the chip via serial communication connector P1 in-built to the development board. I don`t think that Development board and Compiler vendors should force the costumers to buy products like ICD-S where an option like programming via serial link exists. I have seen a program in http://sjeffroy.free.fr/Prog__PIC/BootLoader/bootloader.html which seems like it might work given the fact that bootloader file “loader.hex” pre-exists on the chip. Personally, I did not try running this program and programming the chip via RS-232.

3.4.   The Reference Book: Embedded C Programming and the Microchip PIC by Barnett, Cox and O’Cull

This book is a good guide for introducing the microcontroller technology. First chapter is dedicated to teaching basic C programming however, this book shouldn’t be considered a C programming handbook. One should always have a book like: Teach yourself C by Zhang ISBN 0-672-31861 as a C programming reference guide for beginners.

This book is designed to teach C language programming as it applies to embedded microcontrollers and to fuel knowledge in the application of the Microchip family of PIC microcontrollers. Coverage begins with a step-by-step exploration of the C language showing readers how to create C language programs to solve problems. PIC processors are then studied, from basic architecture to all of the standard peripheral devices included in the microcontrollers. Numerous worked-out example programs demonstrate common uses for each of the peripherals. Readers are subsequently introduced to the built-in functions available in C, to speed their programming and problem solving. Finally, readers are taken through use of the C Compiler, and to help custom learn to efficiently develop projects.

Included with the book is a CDROM containing samples all of the example programs from the book as well as an evaluation version of the CCS-PICC Compiler.

Author`s note 01/22/04 : In the first examples and projects in chapter 1, functions like “scanf” and “printf” are used that require prior knowledge to interface the board through RS-232 which is introduced in the late chapters of the book. It might be discouraging for the student not being able to do the first project of the book, hands-on. Although I was able to find answers to most of my questions about using the C compiler and the hardware however, I had to do a lot of skipping between chapters and Appendixes to find these answers which was time consuming. In general it is a nice and descriptive text book.

The most quick and effective way of learning a new topic is, having hands on experience. In this section we will conduct some experiments using the FlashPIC Development board to which would give us a jump start on in PIC usage.

Timers and counters are one of the most commonly used perpheral in a microcontroller. They can be used to measure time periods, speed and provide output signals in a specified rate. 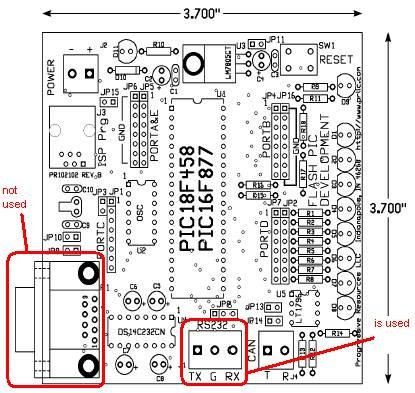 The command line above, is used to tell the compiler to insert an appropriate code to automatically reload the WDT during delay functions.

Control your Bluetooth enabled devices with this open-source button that is only slightly larger than a micro SD card. Tog...