Microchip has included a new power building block in a microcontroller aimed at LED lighting.

Called the PIC16(L)F1769, the family has the first PICs to offer two independent closed-loop channels. 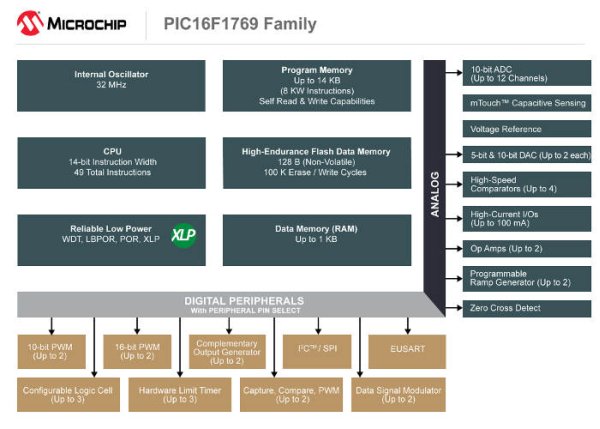 Its aim is to include peripherals which cut processing load in power applications, to allow its 8bit MCUs to compete with fast 32bit MCUs that implement everything in code, particularly for power engineers used to using hardware.

The latest block, bringing the total to nine including the COG, is called the ‘programmable ramp generator’ (PRG). It does what it says on the tin and makes analogue sawtooth waveforms for automating slope and ramp compensation on multiple independent power channels.

“In a boost converter, for example, when duty cycle gets above 60%, the duty cycle can start to oscillate. Slope compensation stabilises this,” Microchip business development manger Lucio Di Jasio told Electronics Weekly at Embedded World.

There are now so many of these peripherals that it is possible to design similar power converters with more than one topology using PIC MCUs.